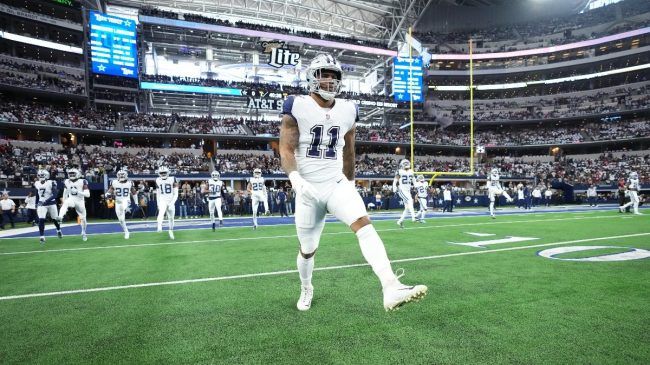 Week 1 of the NFL season is about to kick off and we can’t get any more excited. There are numerous big matchups to begin the new football year, with the Dallas Cowboys vs. Tampa Bay Buccaneers being one of them. Leading into the game, Micah Parsons shares an interesting take about Tom Brady that’s a bit terrifying.

According to Jon Machota, Parsons made a reference to Brady playing in the NFL longer than he’s been alive. It was a rather funny comment, considering everyone outside of Bucs fans likely agrees with Micah Parsons. However, it was his next comment about Tom Brady that caught our attention.

Micah Parsons joked when asked about Tom Brady playing longer than Parsons has been alive: “We got to get him out of this league. He’s been dominating this league too long.”

Parsons added about TB: “He wants to kill you. He wants to step on your throat like you’re a roach.”

Brady is widely known for his fierce tenacity. It’s what has made him great for so many years. Micah Parsons claiming “[Tom Brady] wants to kill you. He wants to step on your throat like you’re a roach,” comes off a tad harsh. Regardless, it might be the most accurate description of the Buccaneers quarterback.

For that reason, the Cowboys will have their hands full in Week 1. Although there are concerns surrounding Tampa Bay’s offensive line, many still believe Tom Brady is the X-Factor in the Bucs’ success. Micah Parsons knows this and is likely gearing up to apply pressure on the GOAT.

Parsons is going to play a major role throughout the year. He’s the reigning Defensive Rookie of the Year and has the potential to win Defensive Player of the Year in 2022. Micah Parsons has a real chance to prove himself once again, especially if he can prevent Tom Brady from stepping on the Cowboys’ throats.