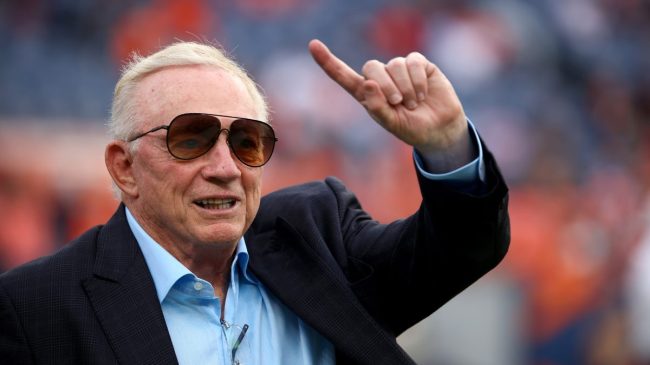 In all likelihood, the Dallas Cowboys won’t be all that good in 2022. Dallas went 12-5 in 2021 and won the NFC East before being bounced in the wild card round by the San Francisco 49ers. The Cowboys also boasted the best offense in the league according to points per game.

But they’ve since made some significant changes.

Star wide receiver Amari Cooper is out the door to the Cleveland Browns. Starting right tackle La’El Collins left for Miami in free agency. Superstar left tackle Tyron Smith is injured, again, and could miss the entire season. And wide receiver Michael Gallup is still working its way back from a torn ACL suffered late in the 2021 season.

Dallas brought in free agent receiver James Washington to help replace some of the production. But Washington broke his foot in training camp and is expected to miss an extended period of time.

That leaves a lot on the shoulders of quarterback Dak Prescott. But owner Jerry Jones doesn’t seem overly concerned about the situation.

Jones went on local radio station 105.3 The Fan on Tuesday morning for a weekly segment. As part of the interview, he was asked about his outlook for the 2022 season and replied with a strange answer.

Jerry Jones on @1053thefan on optimism for the season: I have to believe 1 and 1 is 3. I can't operate where 1 and 1 is 2. Now we all know it is physically. But 3 is where you have to go. You have to have optimism to operate out in the world.

What exactly that means is anyone’s guess. But football fans absolutely no clue.

Some equated it to a hilarious rant by pro wrestler Scott Steiner.

Cowboys fans, meanwhile, saw it as a way for Jones to cover up his poor roster construction.

Translation: I have to hype a mediocre roster as a great roster. I can't admit to the fanbase the #Cowboys are mediocre. We all know we are mediocre but we all have to pretend we are great! https://t.co/odSrSdwfYV

“yeah I know we ain’t winning shit but I gotta believe and convince our fans to believe too” https://t.co/epmaRlMXl7

Not exactly a ringing endorse for Dallas.

The Cowboys begin the season on Sunday against Tom Brady and the Tampa Bay Buccaneers. The Bucs, like Dallas, are coming off an anything but normal offseason.

Something has to give for one of the two teams.