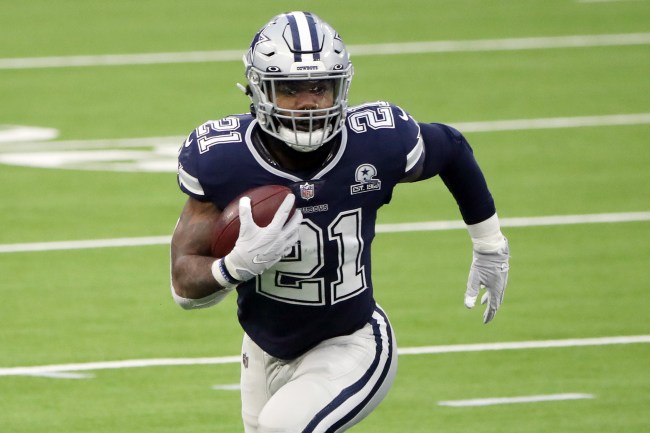 Three dogs owned by Dallas Cowboys star running back Ezekiel Elliott escaped his home and one of them, a rottweiler, bit two people sending them to the hospital according to a report from Tom Steele of the Dallas Morning News.

The rottweiler in question has been put in a 10-day quarantine and Elliot was hit with three $100 citations. No charges have been filed against Elliott as of yet but the police are still currently investigating the matter.

Police said that Frisco Animal Services, which is a division of the police department, was called about 9:30 a.m. Thursday to the Starwood neighborhood, where Elliott lives, about three loose dogs.

The dogs were eventually corralled, but one of them — a Rottweiler — had bitten two people.
The victims were hospitalized for injuries that were not life-threatening; their conditions were not known Thursday evening. Authorities determined that the dogs belonged to Elliott, 25, and he was issued three animal-at-large citations, one for each dog. The Rottweiler was placed in a mandatory 10-day quarantine for observation.
Police said no charges have been filed but that the investigation is ongoing.

Elliott is currently being sued by a pool cleaner regarding a separate incident from last year in which she says Elliott’s dogs attacked her when she entered his residence to clean the pool. According to the lawsuit, she’s seeking between $200,000-$1 million in damages after she said she needed surgery for her arm injury and will likely be scarred for life.

Here’s a recent picture of Elliott with the dogs at his home.