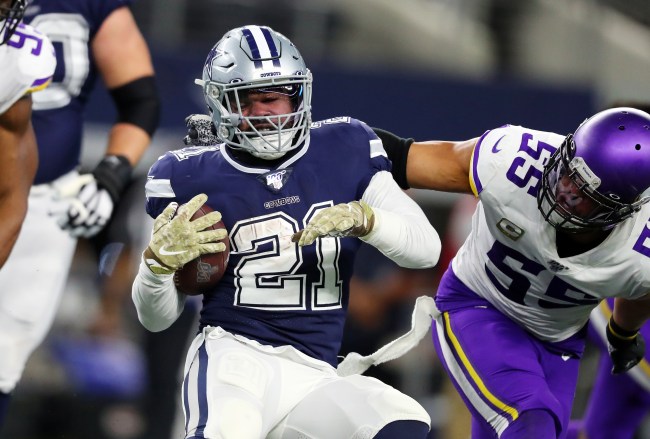 On Monday morning, after the Cowboys 28-24 home loss against the Vikings, Skip Bayless did the unthinkable. No, he didn’t give LeBron James due credit. I said the unthinkable, not the impossible.

Skip, a diehard Cowboys fan, staged a scene in which he tossed his Ezekiel Elliott jersey in the trash after the Pro Bowler had just 47 yards on 20 carries in the loss, averaging a measly 2.4 yards per attempt.

Bayless’ Cowboys have lost four of their last six games, with Zeke posting his worst stats since Week 4, so Skip’s gotta be extra moody already his poor wife.

Ezekiel Elliott’s mother caught wind of Bayless treating her son’s jersey like a snot rag and couldn’t help but warn the Fox analyst to steer clear of anything with the ‘Elliott’ name embroidered on it.

I hope Mrs. Elliott didn’t catch wind of Bayless doubling down, claiming his explosion is zapped and has become a “dangerously overpaid liability.” Yikes.

My running back has turned into a shell of himself. I don't recognize Ezekiel Elliott anymore. He has become a liability and a dangerously overpaid liability. But you know what I did not overestimate? My quarterback. More @Undisputed, now on FS1 https://t.co/E6OzK5iwbI

To the Elliott family: please take comfort in the inevitable fact that Skip will claim Zeke to be better than Jim Brown the next time he has a 100+ yard game.