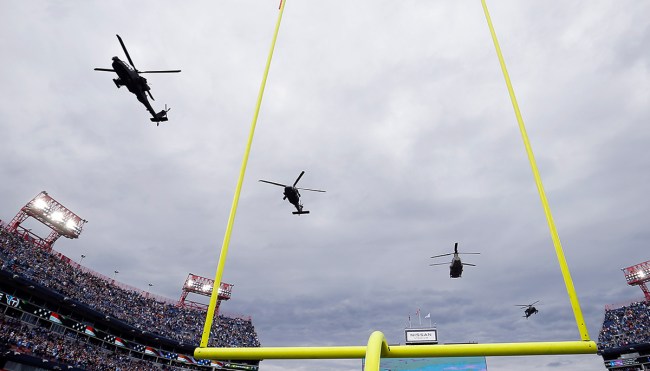 Unlike a lot of people, I’ve never had any particularly strong feelings about Joe Buck’s abilities as a commentator; sure, he can be fairly bland and laughably pious at times, but he seems like a pretty chill dude based on plenty of anecdotes that have come out over the years.

With that said, I was one of the many people who was less than thrilled when he and Troy Aikman fell victim to a Hot Mic Moment that captured them criticizing a military flyover at an NFL game last year. It was bad enough that Buck’s comments about the aerial showcase being a waste of taxpayer money weren’t really grounded in reality, but the real crime here was the blasphemous suggestion that flyovers aren’t dope as hell.

Anyone who’s watched a bunch of jets in perfect formation whiz over their head knows this is an objectively true fact, and I have a feeling virtually everyone who saw members of the 101st Airborne Division fly four helicopters over Nissan Stadium before a game between the Titans and the Saints in Tennessee last month would feel the same way.

Sadly, it doesn’t appear certain government officials are in the same camp, as WTVF reports the FAA reached out to the division after multiple people expressed concern the flyover was too low (as you can see in this photograph, at least one of the helicopters was essentially inside the stadium and at eye-level with some fans in the upper deck).

A spokesperson for the 101st says the division has been in contact with the FAA but maintains the pilots did nothing wrong and will not face any internal discipline based on the information currently at hand.