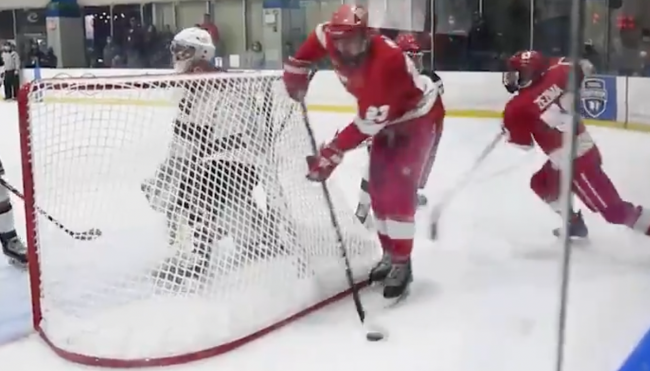 On March 24, 1996, Mike Legg secured a spot in hockey history when he pulled off one of the most absurd goals you’ll ever see during an NCAA Tournament game against Minnesota, where the Michigan winger found himself with the puck behind the Golden Gophers’ net and proceeded to pick it up with a stick that would eventually end up in the Hall of Fame courtesy of what followed.

The insane feat—which would become to be known as “The Michigan”—was the first time most hockey fans had the pleasure of witnessing what is commonly referred to as a “lacrosse goal,” which is a perfectly legal move that involves a player channeling their inner lax bro by scooping the puck off of the ice with their blade before depositing it in the back of the cage.

A number of other players would attempt to mirror the move in the following decades, but it would take almost 15 years for someone in the NHL to pull it off, as Andrei Svechnikov became the first guy in the NHL to do exactly that when he made David Rittich and the rest of the Calgary Flames defense look silly during a contest in 2019.

He’d go on to prove it wasn’t a fluke when he scored another lacrosse goal later in the season before Filip Forsberg decided to get in on the action to become the second member of this exclusive club.

These goals are an absolute nightmare for goalies to defend against, but on Sunday, the USPHL’s Charlotte Rush decided to introduce a fun new wrinkle during a game against the Northern Cyclones. During the team’s 10-1 blowout win, forward C.J Zezima pulled off the hockey equivalent of a Statue of Liberty play when he appeared to attempt a lacrosse goal only to leave the puck on the ice in a sick deke that resulted in Zach Dill sending it across the red line.