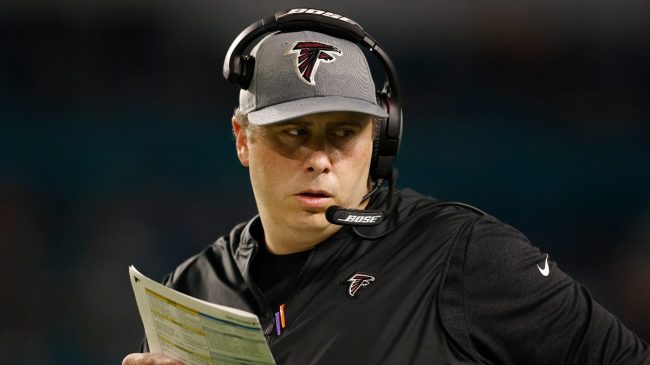 The Atlanta Falcons came out swinging and nearly stole one away from the New Orleans Saints. However, the fourth quarter didn’t quite go their way and Atlanta suffered a gut-wrenching loss. During the post-game press conference, head coach Arthur Smith made sure to let the media know how he felt about them.

Falcons HC Arthur Smith Goes Off On The Media

According to Kelly Price, Arthur Smith let the media have it. The Falcons did just suffer a tough loss, but the frustrations seemed to stem from the offseason. Smith got rather vocal after being asked a question. “You’ll continue to write out obituary. Who cares? We have 16 games.”

"You'll continue to write our obituary. Who cares? We have 16 games."

Arthur Smith vows the #Falcons will "learn from this" loss. pic.twitter.com/az9VgAArVt

Using this loss as a learning lesson is likely for the best. Atlanta has a young roster and many speculate they won’t be a good team this year. Regardless, Arthur Smith doesn’t appreciate the criticism after storming out of the Falcons’ post-game presser, per Kelly Price.

Arthur Smith then ended his postgame press conference after a few questions with a walk-off: “You buried us in May. Bury us again. We don’t care. We’ll get back to work.” https://t.co/ipIJboD9lJ pic.twitter.com/rW8One9uDA

It might be a difficult year for the Falcons, however, Arthur Smith has been a solid coach for this franchise so far. The franchise needs to give him some time to develop a competitive roster. Especially considering Atlanta has just recently freed themselves from the monster contracts of Julio Jones and Matt Ryan.

Look for the Falcons to potentially get back in Week 2. It’ll still be a difficult road ahead, as Atlanta faces off against the Los Angeles Rams next.