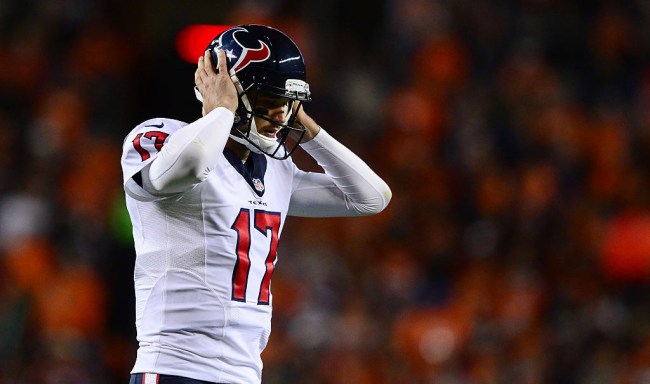 Brock Osweiler threw for a grand total of 2,957 yards, 15 touchdowns and 16 interceptions for the Houston Texans in his one year playing for them. That amounted to a stellar QB rating of 72.2 and for that he was paid $37 million and was then traded to the Cleveland Browns.

The Browns may have actually come out worse than the Texans as they ended up paying Osweiler $15.2 million to play in a grand total of zero regular season games before releasing him and having him land back where it all started in Denver with the Broncos (who will be paying him $775,000).

None of those facts have Osweiler down in the dumps though. In fact, he’s pretty excited…

“I don’t think many people could have seen this situation taking place, but I will say I’m beyond excited that it did take place,” Osweiler said. “This is home.”

Feeling sick to your stomach yet Texans fans? No?

“It’s hard to really describe it in words, but being back here today, practicing as a Bronco and being here — it’s probably a top-five, if not top-three, day of my life,” he added.

One Texans fan certainly is, as he started a Change.org petition calling for Osweiler to return some of the millions he “robbed” from the Texans back to the Houston area for flood relief. 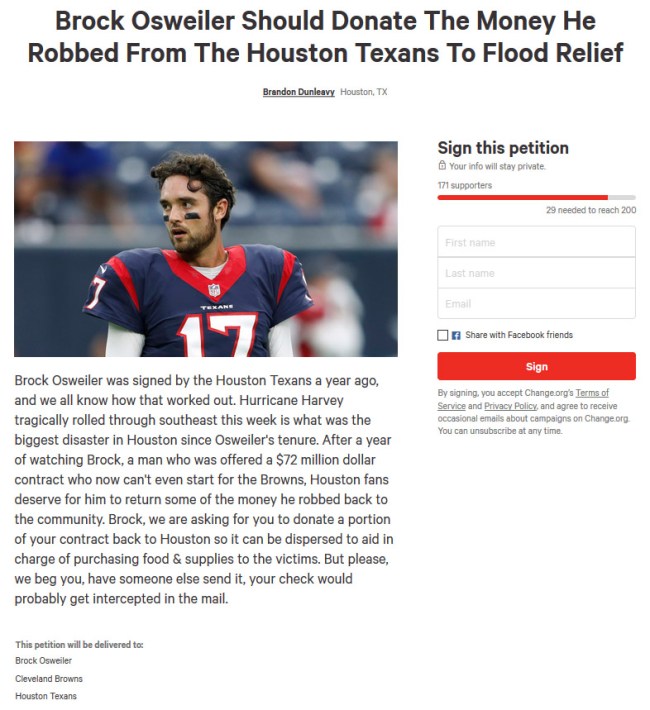 Brock Osweiler was signed by the Houston Texans a year ago, and we all know how that worked out. Hurricane Harvey tragically rolled through southeast this week is what was the biggest disaster in Houston since Osweiler’s tenure. After a year of watching Brock, a man who was offered a $72 million dollar contract who now can’t even start for the Browns, Houston fans deserve for him to return some of the money he robbed back to the community. Brock, we are asking for you to donate a portion of your contract back to Houston so it can be dispersed to aid in charge of purchasing food & supplies to the victims. But please, we beg you, have someone else send it, your check would probably get intercepted in the mail.

For once, I think this is a petition that I might actually sign. Lord knows he certainly owes Houston something more for all the money that they gave him.