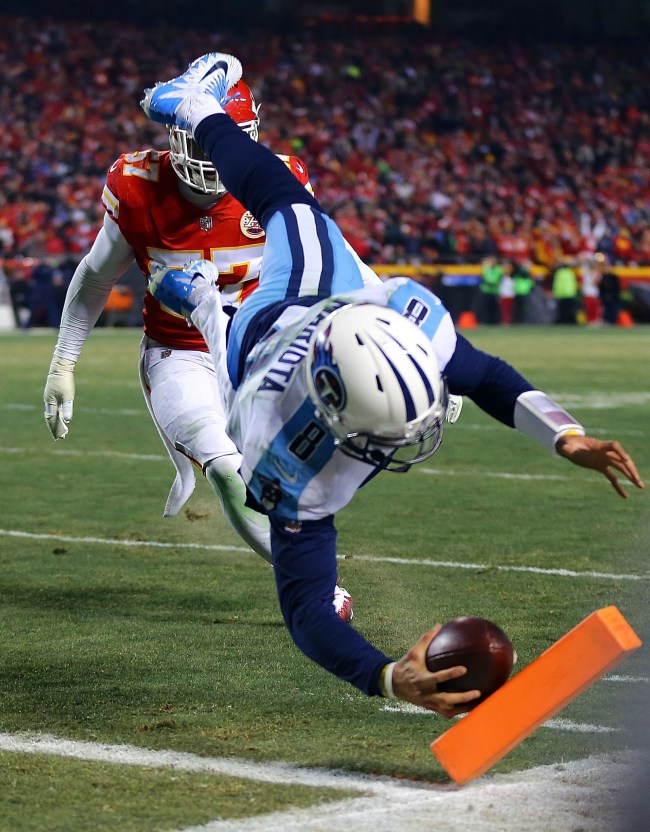 In what turned out to be the most wacky, dramatic NFL game of the weekend, the Tennessee Titans pulled off an improbable 18-point comeback to, once again, knock the Kansas City Chiefs out of the playoffs. The Titans 22-21 win after being down 21-3 was the second-largest comeback on the road in NFL playoff history and the Chiefs’ sixth home playoff loss in a row.

The most wacky and improbable play of the game took place in the third quarter when on third-and-goal from the Chiefs’ 6-yard line when Marcus Mariota rolled left and fired a pass to the end zone that was batted into the air by Darrelle Revis. Mariota then snagged the ball out of the air and ran it in for his first career playoff touchdown pass (to himself).

Considering that because of that play, which has happened only once before in NFL History, Mariota became the first player to have both a receiving and a throwing touchdown in a playoff game, there’s no way anyone could have predicted it, right?

Before the game, Titans fans were asked for some predictions prior to kickoff on Twitter…

And, amazingly, one guy actually predicted Mariota would throw a touchdown to himself.

Mariota throws a pass to himself for a touchdown.

And before you say…

every sport event has these guys. They tweet out 1,000 possible outcomes and delete them as they don’t come true

Actually, this was my only prediction lol

Naturally, people on Twitter wanted him to make some more predictions for them…

Can you buy my lotto tickets?

What numbers should I pick in the lottery this coming week?

Are you from the future?

Now predict that the Titans will win this year's Super Bowl.

I feel you, Marcus. I feel you.