Marcus Mariota Somehow Catches His Own Pass For A Touchdown 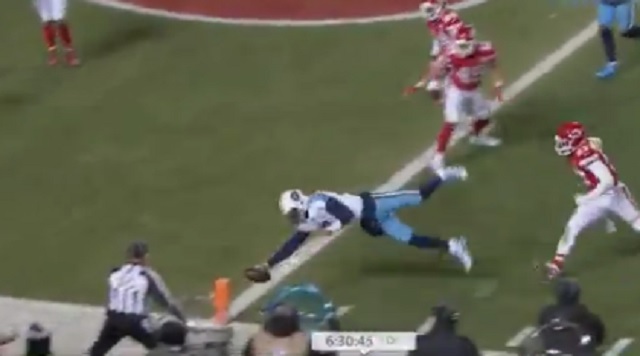 Sometimes coaching is like, they draw it on the paper, you run a straight line and you break out,” Walker said. “Sometimes you’ve got to overcome coaching. That defender is never going to let you run a straight line, so figure out how to make that line straight without running it straight, you know what I’m saying? That’s overcoming coaching. If Coach tells you it’s a nine-technique, but then in the game you’ve got a six-technique, OK, figure it out and block it. That’s what you’ve got to do.

In the third quarer of today’s Titans-Chiefs playoff game, Mariota heeded Delanie Walker’s advice and made the ultimate “backyard football” play when he caught his own deflected pass for a touchdown.

Marcus Mariota out here catching his own passes for TD's pic.twitter.com/MwYl5ktjtY

Marcus Mariota is the first player to catch a touchdown pass from himself since Brad Johnson in Week 7, 1997

Live replay of that Mariota TD Pass to himself. pic.twitter.com/1Tdwu4wduL

When your receivers are dropping your passes then you might as well end up doing it yourself.