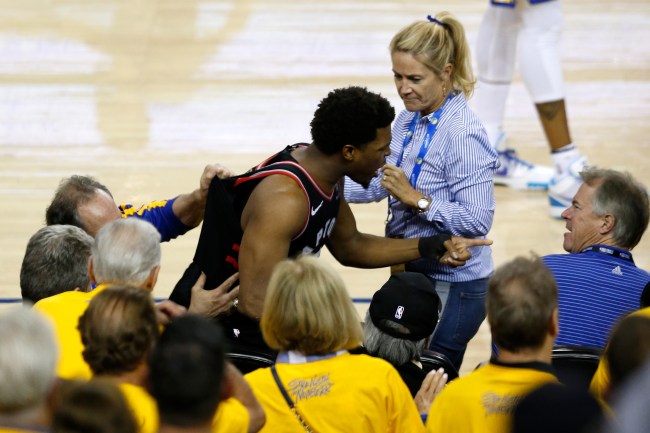 By now, I’m sure you’ve all seen the footage of that boner sitting courtside who unnecessarily shoved Kyle Lowry after he went airborne into the crowd trying to chase down a loose ball. My first impression upon looking at the dude was the he was some uber rich venture capitalist who knows more about wine tannins than he does about basketball.

It turns out I was right. Well, half-right.

It has since been revealed by Axios that the man was Mark Stevens, a venture capitalist and PART-OWNER of the Golden State Warriors.

Stevens, who was a partner with the prestigious VC investor Sequoia Capital (the firm that invested early in Google, PayPal and LinkedIn) until 2012, is reportedly worth $2.3 billion according to a recent Forbes estimate. Stevens became part owner of the Warriors in 2013.

“Mark will prove to be a tremendous asset to our organization as we strive to become one of the model franchises in professional sports,” Warriors executive chairman Peter Guber said at the time. “We’ve managed to build a strong and well-rounded ownership group in which each individual contributes to our success, and Mark is no exception. He’s an ideal fit.”

Lowry revealed after the game that Stevens “reached over and put his hands on me for no reason then he said a couple vulgar words to me.” He added that he hopes they “ban him from all NBA games ever.”

“The fans have a place; we love our fans,” Lowry told ESPN. “But fans like that shouldn’t be allowed to be in there, because it’s not right. I can’t do nothing to protect myself.”

Stevens appeared to have been ejected from the game. That or he just went up to the owners box and watched the game from a cushy leather seat while eating lobster tail.

It will be interesting to see if anything more comes of this.