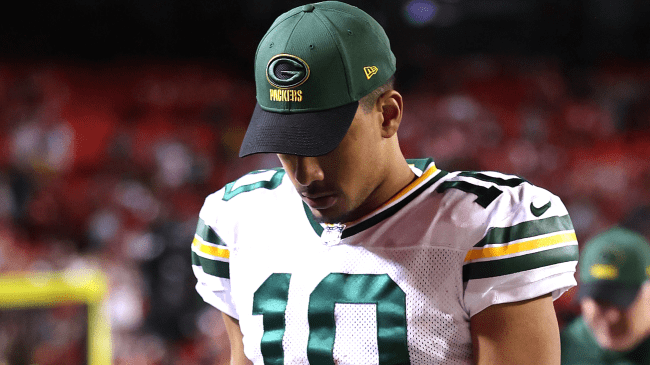 The Green Bay Packers announced on Tuesday that they have given Aaron Rodgers a new four-year contract worth $200 million with $153 million of it guaranteed. Although Pat McAfee has disputed those numbers. (UPDATE: Aaron Rodgers confirmed McAfee’s claim.)

Regardless, Aaron Rodgers is locked up for four more years by Green Bay.

“I feel like I’m at the place relationally with the Packers — in a really good place, especially with Brian and the way our friendship and trust has grown,” Rodgers had previously told McAfee on his show.

“Brian and I have had good conversations throughout the year, and when it comes time to make a decision, we’ll have a conversation and that’ll be that. It won’t be a long, drawn-out process.”

He was certainly right about that.

The same cannot be said for the Packers’ plan to make their 2020 first round draft pick, quarterback Jordan Love, the team’s starting quarterback.

Love was drafted 26th overall by the Packers in 2020 after trading first round pick (30th overall) and a fourth-round pick (136th overall) to the Miami Dolphins to move up so they could take the Utah State quarterback.

He then became the first quarterback to receive a fully guaranteed contract under the new rookie contract system.

So what happens to Jordan Love now that Aaron Rodgers has a new deal?

After playing in zero games in his rookie year, Jordan Love made it into six games in 2021, throwing 62 passes for 411 yards, two touchdowns and three interceptions. He got one start, against the Kansas City Chiefs, when Aaron Rodgers had to miss the game with COVID. It ended in a 13–7 loss with Love going 19-for-34 for 190 yards with one TD and one pick.

So, with Rodgers’ big new deal, have the Packers’ hopes for Love disappeared?

ProFootballTalk.com says the Packers could save face by trading Love and getting something out of all the time and money they have invested in him.

Naturally, as was the case with Rodgers, Denver might be a good fit with their recent hire of former Packers offensive coordinator Nathaniel Hackett as the team’s new head coach. (UPDATE: So much for that idea.)

Of course, Green Bay could always keep love and let him ride the bench for two more years.

That prospect has many NFL fans feeling very bad for the 23-year-old QB.

Jordan Love trying to put on a happy face after the Aaron Rodgers news pic.twitter.com/d83bEjzEzd

I for one cannot wait for Jordan Love’s debut season. pic.twitter.com/4PSPGp6PyX

Jordan love got one of the easiest job out there pic.twitter.com/nHsHioZuj3