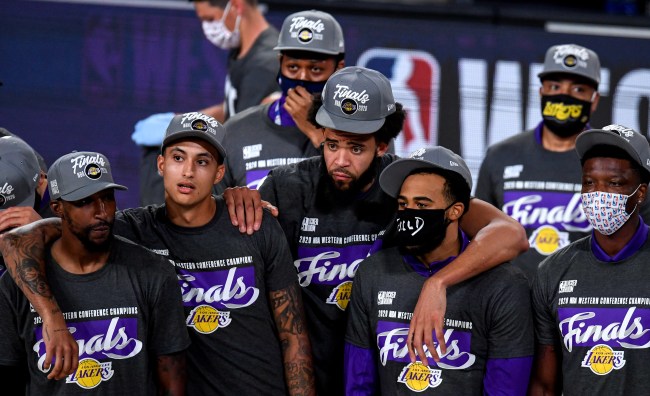 So the NBA Finals are all set. We’ve got LeBron James and the Los Angeles Lakers versus Jimmy Butler and the Miami Heat happening down in the Orlando bubble in one of the weirdest seasons in NBA history.

The first game tips off Wednesday night at 8:00 p.m. ET so the league has already gone and changed the look of the floor in Orlando to reflect this uniquely historic championship series in NBA history.

However… rather than do some kind of floor design that is as unique as the situation the games will be played under, what the NBA came up with is very, very… boring.

New court design for the 2020 NBA Finals in Orlando: pic.twitter.com/CPwO5gVr0N

Seriously, could they possibly have come up with something more basic than that? It looks like something the NBA would put out there for the Summer League.

The most eye-catching part of the NBA Finals floor design might just be the YouTube logo that’s plastered on the court.

NBA is really going to stick a YouTube ad at center court in the NBA Finals? Smh. https://t.co/Y57lMdvPeq

As one can imagine, NBA fans are not happy about this perceived lack of effort and are letting the league know.

I feel like their new logo is basically this. pic.twitter.com/ssjYhUgwXI

What happened to this iconic logo??? pic.twitter.com/72hyxphwso

What a disappointing Finals logo https://t.co/SrCkBtrPu0

There I fixed it pic.twitter.com/IhHGxJHXBY

Honestly, if they had just done that the complaints wouldn’t be nearly as loud.