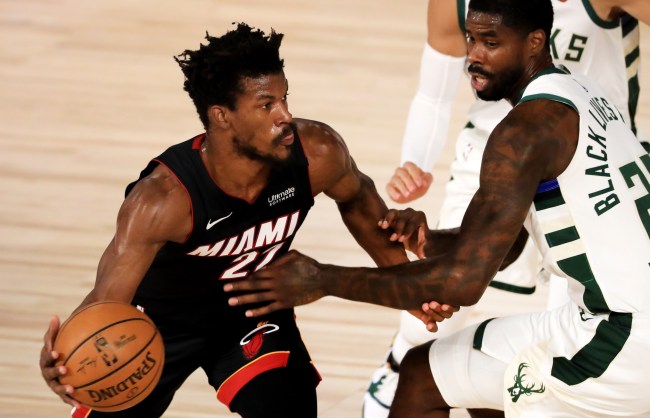 When Jimmy Butler left a 51-31 76ers team with stars like Embiid, Simmons, Harris, and instead signed a four-year, $142 million contract with a Heat team that went 39-43 and seemed to have little chance of winning a championship, NBA fans let him have it for what they thought was a bad decision.

Butler responded to the criticism with an F-bomb laced rant, singing the praises of Miami’s younger players and the potential he saw in them.

Fast forward to today and now that same Miami Heat team is up 1-0 in the Eastern Conference semifinals and Butler averaging 23.8 points. 5 rebounds, 3.6 assists, 2.4 steals, and 1 block per game in the playoffs, even players like Butler’s ex-teammate Joel Embiid are wondering what could have been had he stayed in Philly, who got swept by the Celtics.

Part of the reason Butler appears to have been so successful thus far in the playoffs is because, according to him, a lack of distractions inside the NBA bubble. And by distractions, he means family.

When asked why he hadn’t brought his family into the NBA bubble like so many other players have done, Butler said, “This is a business trip for me. I’m not messing around. Everyone wants to have their family, without a doubt. But we’ve been doing this for this long, what’s another couple of months? It is an individual decision and I respect that decision that my teammates make but I’m here for business.”

Scoring 40 in the Heat’s Game 1 win over the Bucks shows that, at least so far for Butler, business is boomin’.

Jimmy Butler saying he wasn’t going to bring family to the bubble because he’s all business is pure uncut Jimmy Butler. I love it pic.twitter.com/XWuAtkVvNJ

Jimmy Butler said Heat teammates told him to “win the game” late in Game 1: “It’s not just about scoring. It’s about guarding. It’s about making the right play & getting 50/50 balls. I took it up a level in the 4th. If that’s what needs to happen every game, I’ve got to do it.” pic.twitter.com/ZweCo0Ascf

Hello everyone. If you haven’t met Playoff Jimmy. You’re welcome!