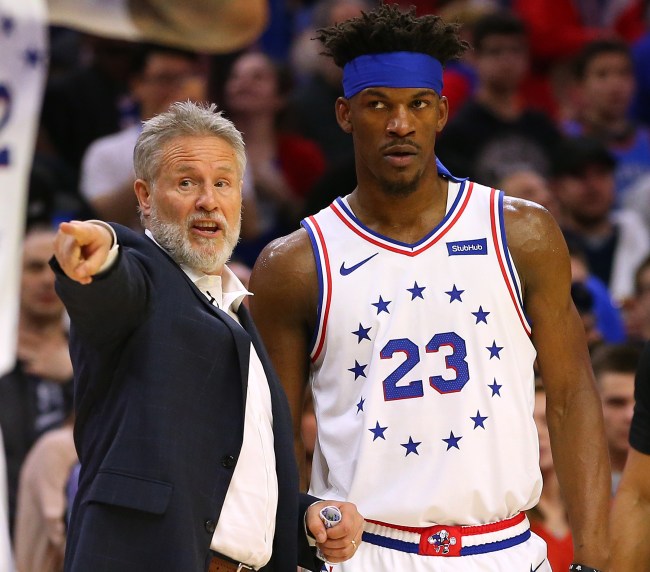 Brett Brown’s Philadelphia 76ers had an embarrassing exit from the NBA Playoffs Sunday, when the head coach’s team got swept by the Boston Celtics to end its dismal season. Now, that’s not all on Brown, but, given some of the questionable decisions he’s made since taking over for the franchise seven years ago through the rebuilding process, some wonder if it’s time to move on for new leadership.

While that’s still TBD — but, personally speaking, it just seems like a foregone conclusion that Brett Brown gets canned — there’s a new report that just came out from Chris Haynes at Yahoo! Sports that sure doesn’t help the head coach’s case to be retained. That’s because, according to a lot of the players, it doesn’t seem like there’s much respect for the coach in the locker room.

Haynes interviewed several players after the loss to the Celtics, and there seemed to be one underlying theme: Lack of accountability. Take a look at some of the details of the new report below.

Players often questioned Brown’s game plan on specific matchups, and there was a lack of trust that permeated the locker room and an inability to hold players accountable, sources said.

Al Horford, one of the more silent and reserved players in the league, stated before the season went on hiatus that he was frustrated by not having a defined role communicated and established with him.

The handling of rookie Matisse Thybulle, who has demonstrated he’s an elite defender, was a head-scratcher. His minutes fluctuated at bizarre junctures, leaving some in the locker room to wonder if Brown had an axe to grind with the youngster, sources said.

Asked Sunday if Sixers fans were able to see the best of what he had to offer as a coach, Brown simply replied, “No.”

Josh Richardson, who spent his first four seasons immersed in the Miami Heat culture, spoke on the Sixers’ culture.

“I don’t think there was much accountability this season and that was part of the problem,” he said following the season-ending loss. Tobias Harris — who finished with 20 points and five boards and had a scary fall Sunday — took some responsibility, saying he needed to look in the mirror and become a better leader. The lack of accountability and leadership was glaring this year.

Yikes, that sure doesn’t sound like Brett Brown has the support of his players, does it? Considering the Philadelphia 76ers were one of the most disappointing teams in the league this year, it’s natural for players to be frustrated after being bounced in the first-round — but this feels like a plea to management to fire the guy.

While that’s bad enough, there’s this: Brett Brown’s rocky relationship with former 76ers forward Jimmy Butler, with the two being at odds so badly that the former refused to sign a max contract to stay in Philly last offseason — ultimately landing with the Miami Heat. Apparently, the head coach didn’t like Butler’s outspoken tone, which even rubbed All-Star guard Ben Simmons the wrong way in a team text chat last season.

"Brown didn’t appreciate how outspoken Butler was with his coaching tactics, and Ben Simmons once took issue with a text message Butler sent in a team group chat that instructed Simmons what not to do in an upcoming game against Brooklyn."

Last season there was a concern about the fit of Jimmy Butler, who is now thriving with the Heat and one game away from sweeping the Indiana Pacers.

Butler was lukewarm on re-signing with Philly last offseason and the organization was aware, but the Sixers were still prepared to offer him a max contract if he wouldn’t take any recruiting visits, sources said.

Butler did not agree to that stipulation, sources said, and both sides ended up parting ways. Butler was a force for the Sixers and proved to be their finisher down the stretch, but he wasn’t sold that the team was invested in winning, and his leadership style rubbed some the wrong way at times.

Brown didn’t appreciate how outspoken Butler was with his coaching tactics, and Ben Simmons once took issue with a text message Butler sent in a team group chat that instructed Simmons what not to do in an upcoming game against Brooklyn, sources said.

It just seems like there’s too much baggage between Brett Brown and the 76ers to bring the guy back next season. He’s a good head coach, but, damn, how badly did the team underperform given that roster — both last season with Jimmy Butler on the team, and this year with guys like Simmons, Joel Embiid and Tobias Harris, among other talented guys. These types of reports never do a head coach any good, so it might be time for Brown to start packing his bags and begin floating his resume out there, because it’d actually be shocking if Philly decided to bring him back.