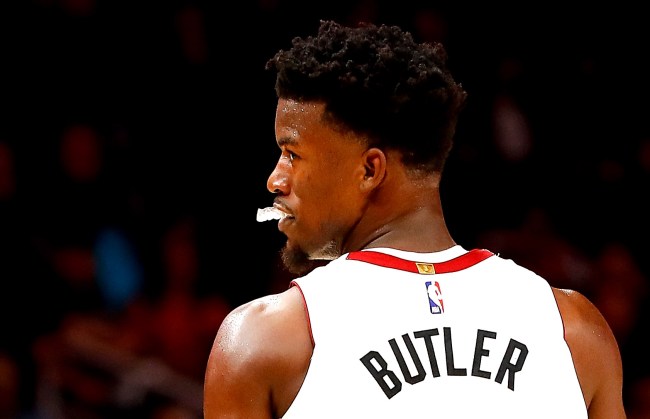 When Jimmy Butler decided to leave a 51-31 Philadelphia 76ers team with Joel Embiid, Ben Simmons, Tobias Harris, and the potential for something close to a max contract, NBA fans scratched their heads wondering exactly what it was he was seeking. After all, the Sixers had traded away Robert Covington, Dario Saric, Jerryd Bayless and a 2022 second-round pick in order to acquire Butler from the Timberwolves.

Rumor had it that Butler was interested in possibly joining LeBron James and Anthony Davis on the Lakers or even joining the Rockets to play alongside James Harden and Russell Westbrook.

Instead, he ended up in Miami signing a four-year, $142 million contract with a Heat team that went 39-43 and appeared to have little chance of winning a championship.

Now, with the Heat sitting at 5-1 (Butler has played in just three of those games), Butler is speaking out about the “disrespect” he felt after making his free agency decision to play in Miami.

“Motherf**kers act like I’m not a good basketball player,” Butler told Chris Haynes of Yahoo Sports. “Like for real. Just think about that. Like I can’t come in and make a huge difference. I’m not going to say ‘carry a team’ because nobody can do it by themselves and I mean that. I’m not putting it all on myself, but I know what I’m capable of. I know what I bring to any and all situations, and the group of guys that we have is the group of guys that I want to play with.

“When I look down the line and as we’re talking about it as an organization on this roster, I know what these guys are capable of. These guys are built like me. We’re one in the same and so they’re only going to get better and they’re not going to get complacent. This is me. I see myself in every one of these guys around this locker room.”

Butler also bragged up Heat rookies Kendrick Nunn and Tyler Herro, as if he saw their potential before signing with Miami.

“Look at the motherf**ker K-Nunn. Look at him. He’s got so much of me in him that it’s scary because his confidence continues to grow,” said Butler. “The same thing with our rook Tyler Herro and [second-year player] Duncan. Come on, man. Just because you don’t know these guys like that, don’t make the mistake of looking past them. They’re going to make sure you do know them pretty, pretty soon.”

He also addressed his reasons for leaving Philadelphia, and it wasn’t because Joel Embiid was unhappy with him being there.

“All of that will come out whenever it’s time,” said Butler. “Right now is not the time. I’m locked in with this. I’m happy, man. I’m smiling and my guys want me to be here, my organization wants me to be here, I want to be here and we’re going to ride this thing until the wheels fall off. I’m not saying Philly wasn’t great, man. We had some really good players. I talk to Joel damn near every f**king day. It’s a brotherhood, man. I love that guy. I’m going to always have his back and I know he’ll always have mine.”