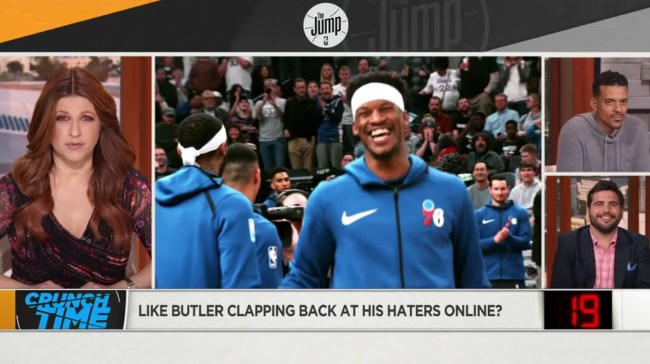 Via NBA on ESPN

NBA free agency madness is about to hit its apex with it “officially” getting underway Sunday, June 30 at 6 p.m. ET.

“Unofficially” it has already begun in earnest with rumors flying around like Harry Potter at a quidditch match.

The main conversations have been centered around players like Kevin Durant, Kyrie Irving, Kawhi Leonard, Klay Thompson, and Kemba Walker.

That last name, Jimmy Butler, has been an interesting one, as rumors have had him going to the Rockets and their allegedly dysfunctional group of stars, or going to the Lakers to be the Chris Bosh-like third man to LeBron James and Anthony Davis.

Butler will have to make a hard choice, however, between playing for a team with a great chance to win, but taking less money (the Lakers), or opting to sign with a team that can give him something close to a max contract (the Sixers, Rockets, Nets, or Clippers).

Bleacher Report’s Ric Bucher wrote on Thursday that Butler is very open to taking less than the max to play for the Lakers.

Butler … has interest in being the third star with the Los Angeles Lakers, even if it means accepting slightly less than a maximum salary. This is a shift by Butler and could reflect the value of the Lakers in his eyes now that they are about to pair Anthony Davis with LeBron James. When Butler originally asked the Minnesota Timberwolves for a trade last season, his preferred destinations were Los Angeles (to join the Clippers), New York or Miami, but the Lakers did not make the list.

This, apparently would be good news to one (Sixers?) fan who commented on a Instagram post that Butler “isn’t worth a max” contract.

Somehow Butler weeded through all of the comments, saw it and clapped back with an excellent reply.

Man, the NBA is the best.