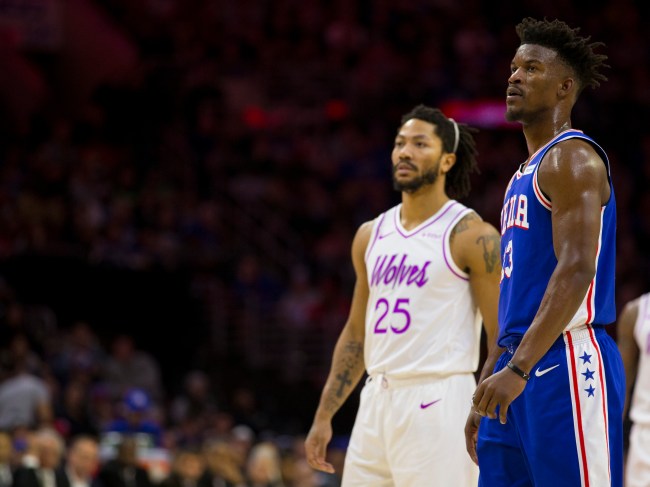 Jimmy Butler’s story about “dominating” his former teammates while with the Minnesota Timberwolves may have slightly been exaggerated, according to a guy who took part in the practice, point guard Derrick Rose. Remember, Butler said that he and the backups waxed the floor against the starters in a dysfunctional practice earlier this season, which, ultimately, led to the All-Star forward getting traded after insulting management.

According to Rose, Jimmy Butler’s story is a little bit different than how he remembers it going down, revealing in a new autobiography entitled I’ll Show You that Butler was far from dominating, as he previously boasted about. Here’s what D-Rose told Michael Rand of the Star Tribune.

“Scored one time in that practice they were all writing about. Yes, one basket,” Rose said, per the Star Tribune’s Michael Rand. “Right hand up to God. What’s so exciting about that? But the media is going crazy. You would think he scored 30.

“It was killing Thibs, I tell you. He wasn’t saying anything to us, but you could tell he was taking it hard.”

This sort of goes against the claim that Jimmy Butler told ESPN’s Rachel Nichols during a one-on-one interview following the dramatic practice, which, reportedly led to Butler calling younger teammates “soft,” which led to the Timberwolves giving in to his trade demand and shipping him off to the Philadelphia 76ers.

However, later in the year, Butler went on the podcast of a new teammate of his on the Philadelphia 76ers, J.J. Redick, and his story seemed to change a little bit. This time, the forward sort of echoed what Derrick Rose claims really happened during the practice.

Given the fact Jimmy Butler and the Timberwolves have moved on from all of this drama, it’s all water under the bridge at this point. Still, it’s interesting to hear how the story has changed a little bit over the course of a few months, with Derrick Rose’s version, seemingly, the one which is most accurate.