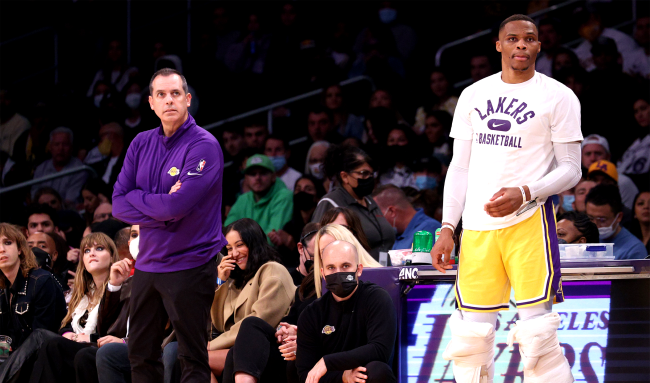 Since winning the NBA Championship in 2020, the Los Angeles Lakers have been in a steady decline.

In what is becoming a trend, for the second straight game, the highest-paid player on the Los Angeles Lakers this year, Russell Westbrook found himself on the bench down the stretch.

Saturday, Westbrook was benched in overtime against the New York Knicks. Tuesday, he did not see the floor the entire fourth quarter.

Related: LeBron James Is A Defeated Man, His Comment Following The Lakers’ Loss To The Bucks Proves It

After shooting a combined 4-of-21 over the past two games, Lakers head coach Frank Vogel had apparently seen enough to warrant sitting the future Hall of Famer in crunch time.

“And I’m speaking for me personally, so it’s a difficult process to be able to figure out and create some rhythm and some consistency where we can actually see what we’re able to do as a team, but those decisions are made by him and his coaching staff, and you’ve got to live with it and move on.”

Russell Westbrook trying to keep LeBron James and Anthony Davis motivated after the tough loss to the Bucks 💯pic.twitter.com/WNR2a89ZEl

When asked if Frank Vogel had communicated with him what he was looking that would keep Russ on the floor, Westbrook responded, “No. He hasn’t. But I don’t need him to be clear. He makes whatever decision he makes, and that’s up to him. My job as a professional is to come to work, be in a positive mindset, put my head down and do my work to the best of my ability and be there to encourage my teammates. That’s it.”

Westbrook was also asked if Vogel had given him any “benchmarks” he needed to hit to stay in the game at the end. Russ didn’t like that.

“I shouldn’t have to hit any benchmarks, to be honest,” he replied. “I put a lot of work in and I’ve got a lot of respect in this game. I’ve earned the right to be in closing lineups. Numbers will tell you. I don’t have to explain that. Like I said, once again, it ain’t my decision.”

For what it’s worth, the 33-year-old Westbrook is considerably down from his usual numbers this year, averaging 18.3 points, 7.8 rebounds, and 7.6 assists, after averaging a triple double in four of the last five seasons. Andi n fairness, his field goal percentage currently sits at .435, just two one thousandths less than his career number of .437. Plus, a whole lot of NBA numbers would kill to be putting up an average statline of 18.3/7.6/7.8.

Not all NBA fans agreed with Westbrook’s assessment of the situation in L.A. though.

Lol he’s earned the right to be benched

How so Russ. You haven’t won with any team. Look in the mirror, stats don’t mean everything but fact teams are quick to get rid of you is glaring. @nba @ShamsCharania

You get what you earn. The 2022 Lakers have never seen the Westbrook who earn the right to be in the closing lineup.