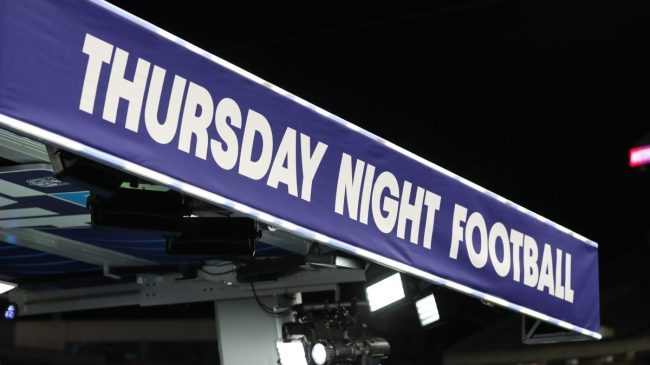 Of all the NFL games that you’ve ever seen, Thursday night’s game between the Colts and Broncos is sure one of them.

The Broncos currently lead the Colts 9-6 late in the third quarter. Neither team has found the endzone. Matt Ryan has thrown two interceptions, and Broncos’ kicker Brandon McManus had a chip-shot field goal blocked.

Amazon began its Thursday Night Football run with a fantastic Week 2 game between the Chiefs and the Chargers. Since then, we saw a horrific game between the Steelers and Browns, a terrifying injury to Miami Dolphins QB Tua Tagovailoa, and now an absolute clunker between Indy and Denver.

Fans have given up hope of actually watching a good game. But they’re not giving up hope of a watchable product. Here are all the suggestions fans have made to Amazon going forward:

Pay Lamar Jackson a ton of money to be a “pinch player” every Thursday.

Amazon should just sign Lamar Jackson for 500 million dollars guaranteed and he can enter games like this and just do cool stuff for a while for whichever team needs him. Like a recurring TNF character when he's needed. Solves everyone's problems.

Play a rousing game of “name some guys.”

Ask for a refund!

Amazon should ask for a refund.

Amazon should just turn on The Boys for everyone.

Hit up NFL Films and see if they could possibly just show a replay.

Amazon should have replayed Seattle vs Detroit over this

Launch the new Lord of the Rings: Rings of Power episode early!

Amazon should just put The Rings Of Power finale episodes up 90 minutes early as a reward for watching this game.

Get in on the international warfare business.

I think Amazon should skip the football next week and have 11 Russians & 11 Ukrainians go on a field with billy clubs & wail on each other.

How about bringing back those Aaron Judge home run cut-ins?

Amazon should just cut the broadcast with some old clips of Judge's ABs will be more entertaining than this punt fest.

Literally anything would be better than what fans have been subjected to on Thursday night.