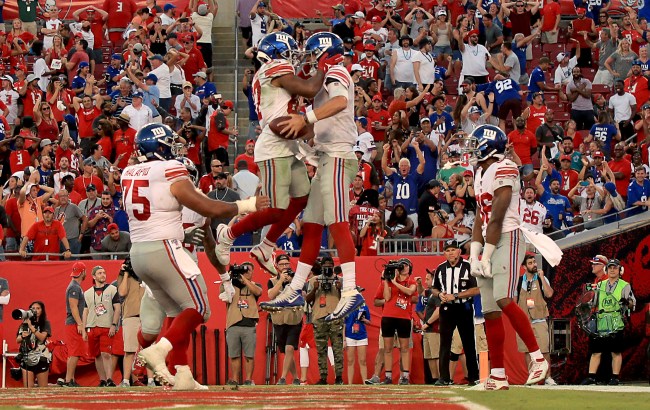 Welcome to the official start of week four in the NFL. If your fantasy team is not playing so well, now it’s time to push the panic button.

After this week, you’ll be a quarter into your season, and it only gets tougher to pull your team out of the hole.

We had some surprising debuts, and the overall number one pick in most leagues will be sidelined till the fantasy playoffs.

I’ve given some options on whom you should target on the waiver wire for this week.

The Daniel Jones era has officially begun in New York.

The other quarterbacks you probably picked up this week didn’t provide any value, time to make a claim on Jones.

Pay close attention to the injury report this week; LeSean McCoy missed the entire fourth quarter on Sunday with an ankle injury.

Damien Williams has a knee injury and could more time, and if McCoy is also out this week, look for Darrel Williams to be the lead-back for Kansas City.

You have an easier time predicting the winning lottery numbers than who is going to be the top performer on the Patriots offense.

Burkhead has been out-performed Sony Michel the last two weeks and in result, has seen an increase in opportunities.

James White will be in the backfield for passing downs, but Burkhead could be the one doing the running.

Saquon Barkley is going to miss up to eight weeks with a high ankle sprain.

Gallman Jr. will be the one taking the majority of snaps in the backfield till his return.

It is a massive blow because you drafted Barkley number one, but if Gallman Jr. can get some volume, he has RB2 potential.

Two weeks in a row Bruce Arian has insisted Peyton Barber is their lead running back and two weeks in a Jones has out-gained him.

Although they both had 14 touches Sunday against the Giants, Jones had 5.7 yards-per-carry while Barber had 3.6.

Jones is a good waiver stash until he sees more carries.

Let’s all admit it; the fantasy tight end is a frustrating position.

You felt like a fantasy guru after you played T.J. Hockenson week 1, and since then he’s had eight total receiving yards.

Dissly is seeing targets in the red-zone and has a touchdown each of the last two games.

Secondly, he’s playing the Arizona defense that Hockenson and Mark Andrews had their big games.

Ranked 4th in points in yahoo leagues, they’re better than some defenses you might have drafted like Baltimore, Houston, Jacksonville, Minnesota.

Their ownership spiked over 50% in most fantasy platforms.

This is the week you have to make a move if they’re available.

The Bills are a top AFC contender. Next week’s game at home against the Patriots will be the game to watch.

When in doubt, play anyone against the Dolphins. They play the Chargers this week, and if you saw what Phillips River did last week, get ready.

I do not trust the 49ers backfield. Matt Breida and Raheem Mostert split carries, but it was Jeff Wilson Jr. with the goal line touches. There is a good chance Tevin Coleman returns this week, which makes it more confusing.

If you guessed Daniel Jones was going to score more fantasy points than Patrick Mahomes, you’re a sorcerer.

The only Vikings player of any value is Dalvin Cook. The Vikings have only passed on 38.6% of plays, and that isn’t changing. Stefon Diggs, Kyle Rudolph, and even Adam Thielen are all boom-or-bust with Kirk Cousins behind center

If you were mad about Bridgewater’s and Kamara’s connection from last week, rest easy.

Michael Thomas and JuJu Smith-Schuster are going to make you jump for joy some weeks but cry in others.

Believeland is closed due to lack of hustle. Deal with it.

Remember all those beautiful things I said about David Montgomery last week? Charlie Nagy ruined it.