What Is Fantasy Guru And Why Should You Use It For Your Fantasy Football League, News And Guides?

Presented in partnership with Fantasy Guru…

It’s not the holidays, fellas, but it sure as hell is the greatest time of year! That’s because another fantasy football season is upon us, meaning we’ll all be locked in on who to choose with our first-round pick, which players are potential breakout stars and, more importantly, reading up on ways to win our league for ultimate bragging rights.

But, let’s face it, winging it as you’ve done in the past isn’t going to get the job done because it takes serious work to get the knowledge you need in order to earn champ status. So make sure you sign up for Fantasy Guru, which gives the in-depth fantasy football league news and guides you need most to take home your league’s title this year. Plus, it’s currently Early Bird pricing, which means you save an additional $10. 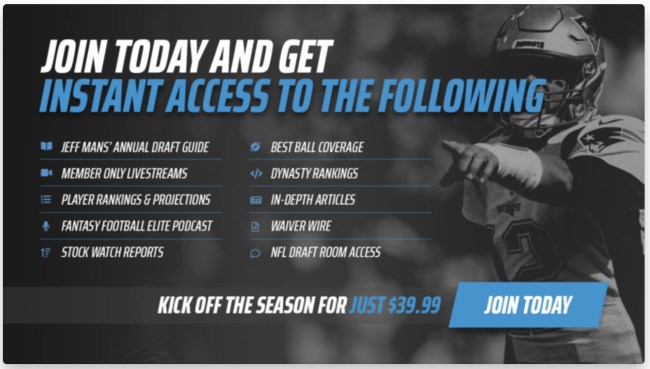 Led by Jeff Mans, a multiple High Stakes League winners, Fantasy Guru has an awesome deal that’s perfect for your fantasy football league, news and guides in 2020. Just take a look at some of the access you get when you sign up for the ridiculously low annual fee of $39.99.

That means you’re up-to-date on the most breaking news and updates in fantasy football this season. There is nothing more frustrating than looking through your draft magazine rankings only to see half the players are hurt or having been traded into new situations. But Fantasy Guru has you covered regardless of what happens, so go ahead and snag the Early Bird special of $39.99. That saves users $10 over the regular price that you can put towards your league’s fees.

You might be asking the question, what happens if the league is delayed or canceled? No need to worry. The guys over at Fantasy Guru are so confident the NFL will move forward as planned, they’ve built in a get out of jail free card.

That’s because Fantasy Guru offers the “GURU Guarantee”, which protects any members just in case the NFL season gets changed or canceled due to COVID-19. Here’s what to expect in case that happens.

NFL Season Delay or Suspension: Should the NFL season be suspended or delayed, all subscriptions will pause and resume if/when the NFL season resumes.

NFL Season Discontinuance: Should the NFL season be discontinued, for any reason, with five (5) or fewer official weeks played (weeks do not need to be consecutive), subscriptions will then be cancelled and all Fantasy Guru subscriptions paid for prior to 8/31/2020 will be rolled to the next NFL season. in addition, should such circumstances occur, subscribers will receive a one year subscription to Elite Sports Betting at no additional charge.

But let’s not even think about that happening, because we all need the NFL more than anything to give us some semblance of excitement, right?

So if you’re looking for the best fantasy football news and updates — as well as a place to host your league — then Fantasy Guru is your one-stop-shop. A membership gets you the insights of a legendary fantasy sports player in Jeff Mans, a slew of information and up-to-the-second updates as they’re known, and the protection of the “GURU Guarantee” should anything happen to the NFL season. Plus, with Early Bird pricing going on right now, you can save an additional $10. The only thing better than all of that? Winning your fantasy football league and boasting all year about becoming the champ.