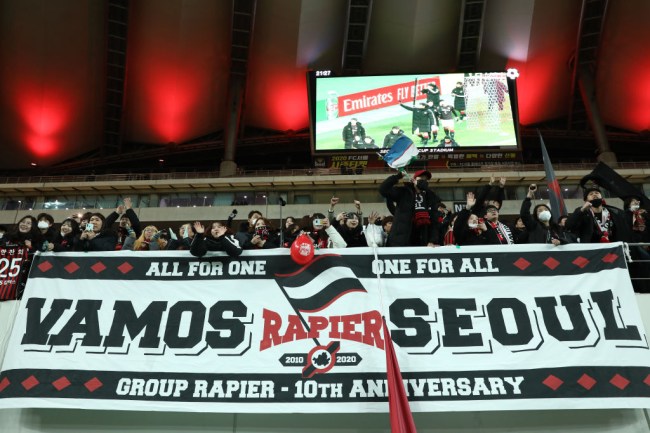 The way the sports world has reacted to our current global situation has been fascinating, to say the least.

Take the Bundesliga, which triumphantly returned this weekend. While having soccer back was an absolute treat, the effect of an empty stadium was certainly prevalent, particularly when it came to the atmosphere.

Without fans in attendance, matches are obviously lacking the energy that they provide, thus leading some clubs to try to mitigate that negative impact with creative ideas. Germany’s Borussia Monchengladbach, for example, gave fans the opportunity to purchase a cardboard-cutout version of themselves that can be placed in the stands.

Then there’s the Premier League, which is set to return sometime in June: they’re debating pumping in artificial crowd noise to their broadcasts (something that I’m strongly in favor of).

For Seoul’s first home game, around 20 mannequins, many holding banners and all wearing masks, were spaced evenly around the seats behind the goal usually occupied by the club’s most active fans.

As the game progressed, however, Korean social media started to light up as it became apparent to viewers that these mannequins, supplied by a local company, Dalkom, whose CEO is a Seoul fan, looked very much like sex dolls.

In addition, some mannequins held signs offering messages of support to players and the team that seemed to reference adult content streaming sites. [via ESPN]

The club released an official statement in an effort to apologize for their hilarious mistake:

“We would like to apologize to the fans. We are very sorry about the supporting mannequins that were placed during the game on May 17. These mannequins may have been made to look and feel like real humans but they are not for sexual use — as confirmed by the manufacturer from the beginning. Our intention was to do something lighthearted in these difficult times. We will think hard about what we need to do to ensure that something like this never happens again,” the social media statement on Facebook read.

FC Seoul certainly picked the wrong time to make such a mistake, as the K-League is perhaps as popular as it will ever be right now, as it is one of the only professional sports leagues that’s active during our current global situation.