Padres’ Fernando Tatis Jr., Manny Machado And Will Myers Let Fans Into Dugout And Led Them To Safety During Shooting Outside Nationals Park 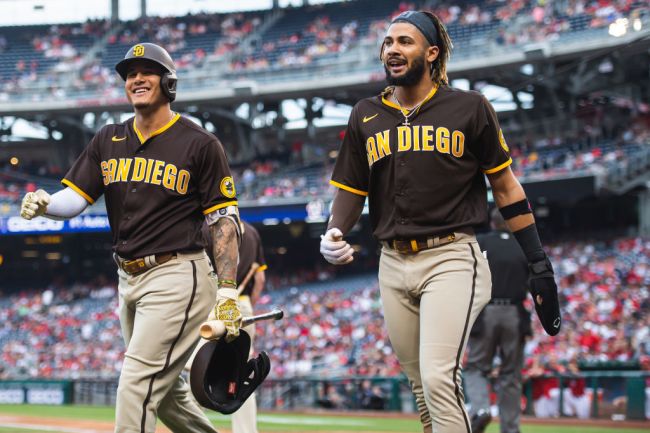 Padres’ Fernando Tatis Jr., Manny Machado, and Will Myers are being praised for their heroic reaction to the shooting outside of National park.

According to D.C. police at least four people were shot outside of Nationals Park on Saturday night during the Padres-Nationals game.

Two additional victims associated with this incident walked into area hospitals for treatment of gunshot wounds. MPD is on scene and actively investigating at this time.

After the gunshots were heard by everyone inside the stadium, Tatis Jr, Machado, and Myers reportedly opened the gate to the field to allowed fans to get into the dugout for safety.

Just ended up in the Padres dugout bc of shooting. Thank you Manny Machado and @Padres pic.twitter.com/B2GaJ7Wt6V

Here at Nats Park as fans are making their way out of the stadium.

Talked to a fan who said the spectators in section 112-113 ducked down when they heard gunshots and everyone followed suit. Tatis and Machado opened the gate to the field and took fans to the dugout. pic.twitter.com/HM70l0tgDQ

Yes, we are safe now. Was it scary? Absolutely. Happened in section 112, I was in 114. We all hit the deck. Machado, Myers, and Tatis all came out and sent fans to the dugout. I have nothing but respect for them and the @padres. The cops locked the gate, they opened it.

Players, including Fernando Tatis Jr. Just ran into stands and grabbed family members and brought them to clubhouse. pic.twitter.com/DlC1bSv3I7