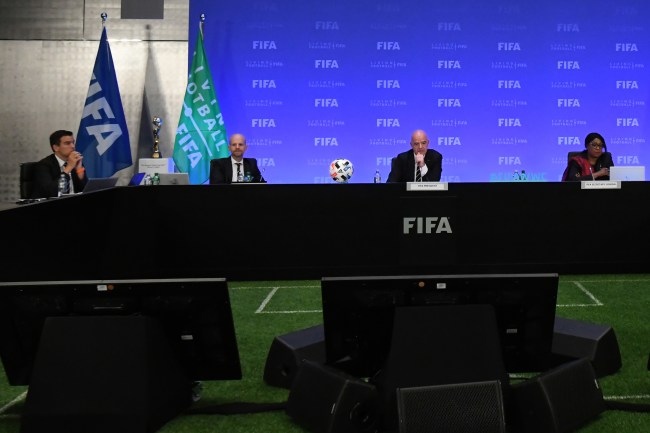 Oh, FIFA. If there’s another group of people who have made more money doing less, I’d like to meet them. Turns out, soccer’s governing board found a way to turn the pandemic in their favor:

But there is one group that has proved bulletproof from the costs of the pandemic: FIFA’s top executives.

While cost-cutting, resource-saving and painful decisions have become the norm in most of the soccer world, the men and women who sit on FIFA’s 37-member governing council continue to collect six-figure salaries that, for some, will amount to $250,000 this year but require their attendance at as few as three meetings.

During the pandemic, the calls have been shorter than ever, according to attendees. Most members never speak; some, in fact, have not said a word during one in years, longtime members say.

First of all, sitting in a Zoom meeting with your mic muted and your camera off, knowing you don’t have to say a word the entire time, is one of life’s greatest pleasures. I’ve never been more relaxed in my life than when I’m in a Zoom meeting where we’re “going over the next couple months” and some authoritative voice is laying out the Q4 gameplan, or asking for ideas from people who matter.

But getting paid $80,000 to do that? Damn. Makes the old Zoom minesweeper sessions seem a lot less pleasurable. Here I was, enjoying my complete lack of preparation and expected insight on Zoom calls, not knowing that FIFA executives were getting paid a handsome year’s salary for the exact same experience. Sounds like I’ve got something to bring up in our next Zoom meeting—fair compensation for these little sessions.

Nobody should be surprised that FIFA is doing this. It’s one of the most corrupt organizations in all of sport. Sepp Blatter ring a bell? Dude made Bernie Madoff look like Obama.

So, good for you, FIFA. I want to hate this but frankly, I don’t care enough about soccer to get mad. As such, I support it. Hell, give yourselves raises. I seem to recall that soccer was one of the first sports to come back after the shutdown? You guys have earned it.