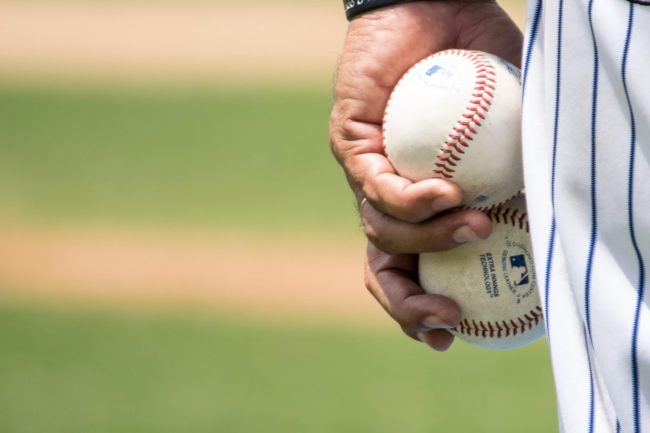 A video clip of a Finnish baseball player cascading into a river while trying to field a batted ball is now going viral on social media. The clip, without context, is both unbelievable and hysterical to watch. Here’s a bit of background for those not familiar with the sport.

Apparently, a river running through the outfield is in play at this particular venue should the ball be batted in fair territory. There’s also no fence to prevent the ball flying into the babbling brook. While the sport seems to have the influence of American baseball (runs, bases, fair/foul, 3 outs, 3 strikes), there are some other stark differences, too.

A regular pesäpallo game is played in two periods of four innings each. A period is won by the team which scores more runs in its offensive half-innings. If the periods are tied, there will be an extra inning; if needed, there is a round (similar to a penalty shoot-out) where each team tries to bring a player home from the third base.

If a player aims high and hits a very hard hit that would be a certain home run in baseball, it is counted as a foul in pesäpallo. This increases the tactical approach. All home runs, therefore, are the “inside-the-park” variety.

Catching a ball in flight is not an out.

A home run is scored if a batter advances to the third base on his own fair hit.

The bases are not laid in a diamond shape; the players have to ‘zig zag’ the court.

But now, back to the original topic.

This clip of a Finnish baseball player cascading into a river in right field is going viral for obvious reasons. The video shows the fielder attempting to make a play on a batted ball, but instead of picking up the hard-hit grounder, he trips over a hill in the outfield and hilariously falls into the water below.

It looks like he was on a slip ‘n slide.

It’s hard to believe this ball is in play, but without a fence, anything goes. I guess they have a camera at the foot of the river to catch moments like this.

Social media took off with the clip with fans posting their immediate reactions on Twitter.

Hey @QualkTalk This is what can happen when you play "baseball" without a ground rule double rule. https://t.co/xBbzcMjpf3

HE SHOOTS THE RIVER THE RIGHT FIELDER IS AFTER IT HE DIVES… https://t.co/69CdnemW1v

Seeing a river in play had baseball fans so confused.

Finnish baseball. This beautiful stadium is built right by the river 😂 ⚾️ https://t.co/ogHgnENgWr

My question: why was there a camera in the stream videoing? https://t.co/HpNs2KalCY

This is quite spectacular. https://t.co/mcq2gNhX1y

Definitely going to need to find out where I can watch more of this action.