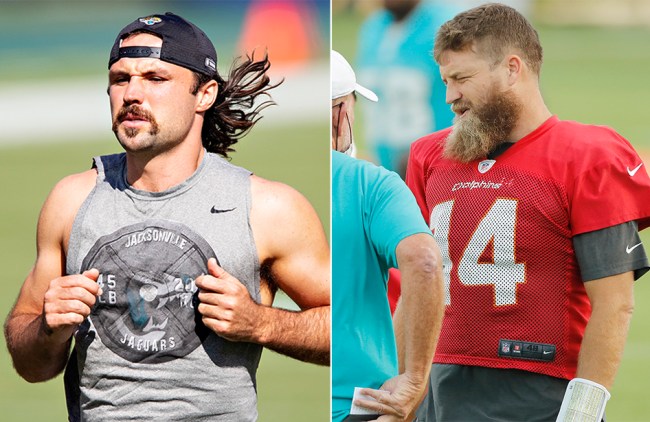 The Dolphins and Jaguars might not be a marquee match-up this coming Sunday but the trash-talking between quarterbacks is quite enjoyable.

Gardner Minshew and Ryan Fitzpatrick might be just as well known for their facial hair game and the quarterbacks are commenting on one another’s folicle choices.

John Reid of the Florida Times-Union filed a story in which Dolphins quarterback Fitzpatrick takes a little shot at the Jaguars quarterback while putting over his own facial hair choices.

“The mustache versus the beard, I think the beard is a cooler look,” Fitzpatrick said. “I think guys that grow mustaches a lot of times have patchy sides for their beards, so they just stick with the mustache,” said Fitzpatrick.

Minshew heard the criticism and took a couple shots of his own.

“I’ll let mine speak for itself. But I think I’ve shown I can grow a beard with no patchy sides. I’m gonna have respect for my elders. Especially when they’re much, much elder,” commented Minshew.

The Dolphins quarterback has thirteen years on the younger Minshew.

“A lot of guys try to do what Gardner does, but it just doesn’t look right,” Jaguars defensive end Josh Allen added. “I feel like everybody can rock a nice beard. I have a nice beard, it’s not like his.”

The two teams face off on Thursday night in Florida in Jacksonville.