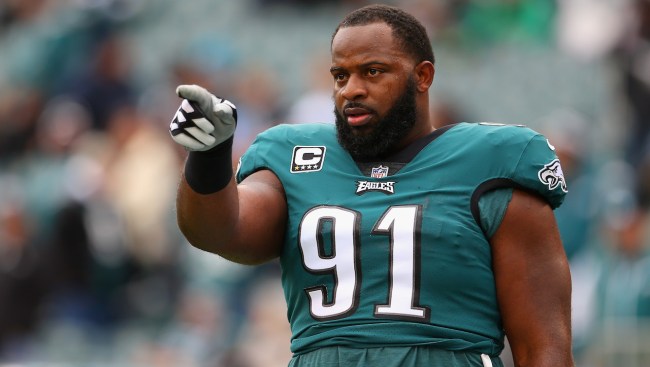 Last Wednesday, Philadelphia Eagles defensive lineman Fletcher Cox popped up on the injury report and missed practice due to an “illness”. However, he returned to practice the next day and played in the Eagles’ Sunday night game at Dallas as usual. And now, we know what that “illness” actually was: an attempted burglary.

According to various reports, Cox was involved in an altercation in the early hours of Tuesday, October 15 when a man tried to break into his Mullica Hill, New Jersey home.

ABC 6 reports that after midnight on October 15, a man named Corbyn Nyemah showed up at Cox’s home looking for his ex-girlfriend. The report alleges that Nyemah damaged the woman’s vehicle “before attempting to forcibly enter the home by throwing rocks through the front door.”

Additionally, court records indicate that surveillance cameras at Cox’s home captured Nyemah “walking around the exterior of the property with a baseball bat and attempting to enter the garage multiple times.”

As Nyemah attempted to enter Cox’s home, the Pro Bowl lineman armed himself with a shotgun and called the police, prompting Nyemah to flee in a Porsche SUV.

The Affidavit of Probable Cause says a police pursuit began but due to “erratic driving and identification of the suspect” the pursuit ended at the Commodore Barry Bridge. U.S. Marshals captured Nyemah late last week.

Action News spoke with Nyemah but he wouldn’t comment about specifics but said much of what is in the criminal complaint is true. He said he wanted to talk to his ex-girlfriend and believed they were working on rekindling their romance.

A temporary restraining order has been granted for Nyemah’s former girlfriend. He allegedly sent her a photo by text while brandishing a firearm after the police pursuit.

While Nyemah is set to appear in court next week, all of the greater Philadelphia area would likely sleep better knowing that Nyemah was placed into an insane asylum, as you have to be a legitimate CRAZY PERSON to go after a shotgun-wielding Fletcher Cox, who stands at 6’4″ and weighs 310 pounds.

Nyemah wouldn’t go on camera but didn’t deny the attack. He told me most of what was detailed in court records was true. Police say surveillance outside Cox’s hom captured much of the attempted burglary. Nyemah says he wanted to talk to his ex-girlfriend who he dated for 2 yrs. pic.twitter.com/roKUWTaFcu