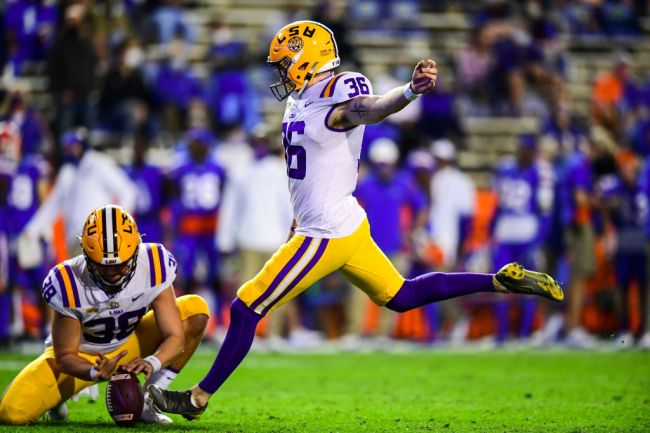 The honeymoon is over in Baton Rouge, but LSU bounced back from a string of bad news with a 37-34 upset win at No. 6 Florida on Saturday night. Over the course of the past few weeks, LSU has had COVID-19 issues and a significant number of players opt out.

#LSU will play tonight with 54 scholarship players, sources tell @SINow – one above the SEC threshold.

They have four linebackers and are starting a true freshman quarterback.

They are playing the No. 6 ranked team in the country.

On top of everything from a numbers standpoint, the program issued a self-imposed bowl ban for this season. They’re currently under investigation by the NCAA regarding rampant recruiting violations and allegations of covering up multiple account of sexual assault.

A lot of details are left to be sorted out, but the school’s athletic programs (football and basketball in particular) have paid players to attend their university through multiple under-the-table revenue schemes. The practice is common to some level in both sports, but LSU’s grievances are far worse. Allegedly, in its most simple form, the football program was siphoning money from a children’s hospital to afford a bribe for a top recruits. In addition, there have been multiple alleged victims of sexual assault that have come forward with accusations against former players on the team. Some of the victims went so far as to describe the lengths that the school took to cover up the trail and, if true, it is abhorrent.

The expectations were high on the Bayou and as the reigning national champions, a 3-6 season wouldn’t have cut it. It was trending that way and the Tigers entered as 23-point underdogs. Orgeron’s team jumped out to a seven point lead at halftime as the fog continued to thicken outside of the locker room. Visibility was low by the end of the game and kicker Cade York had a chance to make history and win the game. He hit a 57-yarder to win the game with less than 30 seconds on the clock, which was the longest in school history.

York Gator-chomped in celebration, trolling the limited capacity home fan base. LSU and Florida has been an increasingly heated rivalry ever since a disagreement surrounding the rescheduling of a previous matchup amidst a hurricane occurred in 2016. And after the defense held and the clock hit zero, he did it again.

Cade York was chompin' through the fog after LSU's win over Florida 😆 pic.twitter.com/L5GNJkU8wB

It was a huge redemption win for a program in disarray, but a band aid can’t heal all wounds and what is coming for the Bengals will not be good. Either way, Florida is out of the NCAA playoff picture unless they beat Alabama in the SEC championship next weekend. For LSU to be the spoiler will be enough for now.