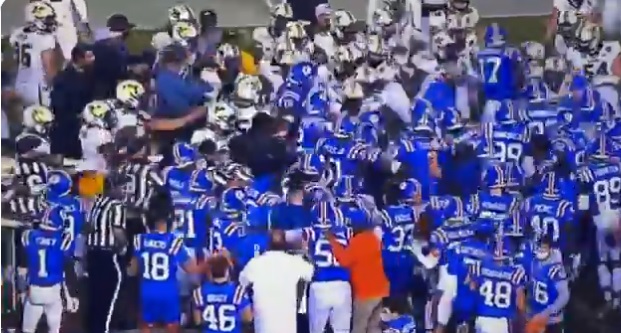 Things got heated between Missouri and Florida players on Saturday night.

Before halftime, A Mizzou defender laid a late hit on Florida QB Kyle Trask on the final play of the half.

Kyle Trask gets nailed late after letting the ball go. Ref is right there, but decides the flag is too comfy in his pocket to disturb it from its nap to throw it. Full scale brawl ensues.

Florida players got angry over the hitand started fighting the Mizzou players on the field.

Florida and Missouri break out in a fight at midfield as we’ve hit halftime. pic.twitter.com/gcv6YdCCLN

Three players were ejected from the Florida-Missouri game following a brawl that unfolded at the end of the first half. pic.twitter.com/GTavCznk6B

In the end, three players were ejected.

Refs announce Florida's Zachary Carter and Antwuan Powell have been ejected along with Missouri's Tre Williams.