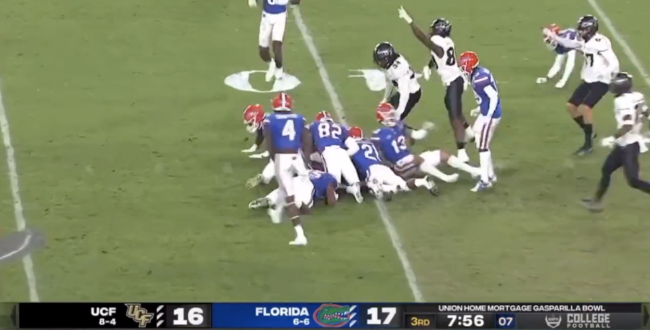 Have you ever watched the kickoff of a football game and wondered “what if they just kicked the ball as hard as they could at another player?” Well, Florida wanted to find out on Thursday night.

As the Gators faced off with in-state opponent UCF, they pulled out every stop to try to win. They didn’t, but it resulted in one of the most entertaining onside kick attempts of all-time.

Midway through the fourth quarter, Florida held a one-point lead. After finding the end zone to take the lead, kicker Chris Howard lined up for the kickoff.

Howard took his five-step approach and kicked it as hard as he possibly could directly at a UCF player. It bounced off of the Knight, who turned his back to get downfield in coverage, and ricocheted right in the direction of the kicking team.

Florida almost recovered, but it ended up being unsuccessful.

The Knights recovered, went the length of the field and scored. From there, they went on to win the game 29-17 and hold bragging rights over their in-state opponents for the foreseeable future.

Although it didn’t work, and although it may not have been completely intentional, Florida’s “kick it as hard as you can and hope it bounces off a player” method was something that I have never seen before. More teams should try the Gators method, if only for entertainment value.