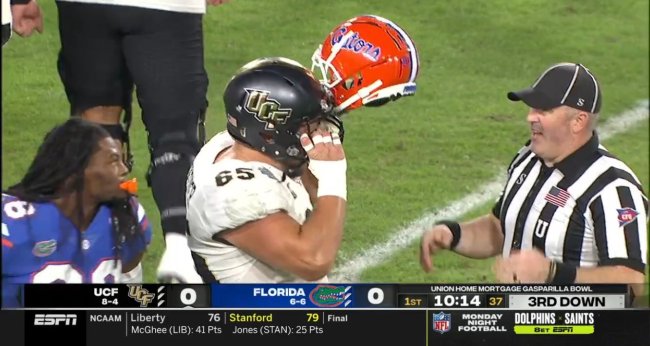 Thursday’s Gasparilla Bowl was a battle of two Florida programs. 6-6 Florida limped its way into bowl eligibility while 8-4 UCF played its way through hardship into a bowl game, and it looked like it.

For the Knights, it was an opportunity to make a statement against a team that, quite frankly, refuses to play them. The stadium was filled with UCF fans while a smattering of Gators showed up to watch their team try to get up for a game that they clearly did not care as much about.

Florida entered the game in between head coaches and with a starting quarterback that was set to transfer, possibly to UCF. It was a strange matchup that played out exactly in that manner.

Early in the first quarter, Knights offensive lineman Cole Schneider set a block on linebacker Ty’Ron Hopper. During the play, the two had their heads collide at some point.

As a result, Hopper’s play stuck to Schneider’s and connected at the facemask. It was chaos as everybody on the field tried to figure out how to separate the two helmets and was rather funny.

Schneider, before eventually taking his helmet off, was wearing his helmet with the Florida helmet attached, just suspended in the air.

This is not the first time that two helmets got stuck to one another, but it is never not funny. UCF went on to win the game 29-17, so perhaps it was an omen that Schneider’s helmet was the one that stayed on. The more dominant helmet, if you will.