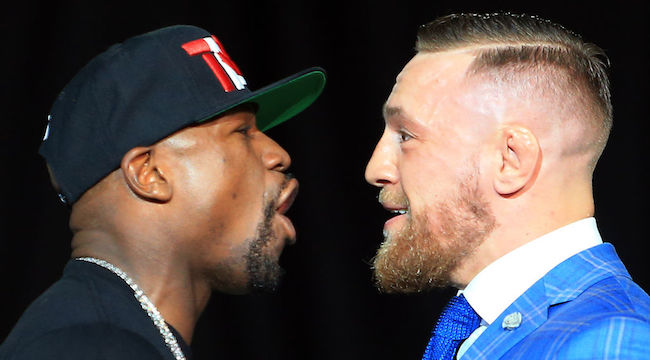 The May-Mac world tour may be over but there’s still plenty of fallout over some insensitive language that was used during the promotion of the fight. Yesterday, Floyd Mayweather was the subject of much of the criticism when called McGregor a “f*ggot* on stage. Mayweather’s camp is now claiming that the only reason Floyd lost his mind and used the gay slur was because Conor called him a monkey.

Mayweather’s rep says, “The reason Floyd called Conor the F word is because Conor called Floyd a monkey. Floyd has nothing against gays or lesbians at all … Floyd has them on his staff. Floyd has nothing but the utmost respect for gays and lesbians.”

We’re told the monkey comment allegedly happened off mic when Conor was storming around the stage and hyping up the crowd.

That would pretty fucked up on Conor’s part if true but it doesn’t excuse Mayweather from using a gay slur on stage. At least all this terrible trash talk is over and finally can move on to the actual fight.