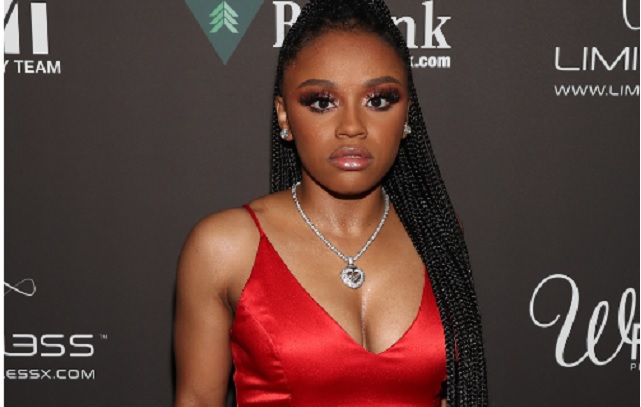 Last month, Floyd Mayweather’s daugher Iyanna, also known as Yaya, was arrested after police say she stabbed the ex-girlfriend of her fiance rapper NBA Youngboy in the arm several times.

Iyanna Mayweather is currently in Houston’s Harris County jail after getting arrested at 1:30 AM Saturday. Law enforcement sources tell TMZ, the alleged victim and NBA Youngboy were at his home when Iyanna arrived and told the woman, Lapattra Lashai Jacobs, she was Youngboy’s fiancee and Jacobs should leave the house. Jacobs then told Iyanna to leave.

Lapattra Jacobs, the woman who was allegedly stabbed by Iyanna, showed off her arm cast on Instagram live and claims that her arm is paralyzed due to the stabbing.

Iyanna is currently out on bail and is reportedly facing up to 99 years in prison over the alleged stabbing.

Iyanna Mayweather has hired Kurt Schaffer to represent her against the Harris County District Attorney’s Office over allegations that she stabbed NBA YoungBoy’s baby mama last month, BOSSIP has learned.

Schaffer successfully defended J. Prince, the founder and CEO of Houston’s Rap-a-Lot Records, in a case accusing him of ordering Ronnie Bookman to be jumped in 2007 at a gym complex he owned, because Bookman refused to sell his ownership stake in a local recording studio, according to news reports from that time.

he 19-year-old Mayweather is facing serious charges as well. Police said she stabbed Lapattra Jacobs after their verbal dispute inside her fiance NBA YoungBoy’s Houston mansion turned physical. She was charged with aggravated assault with a deadly weapon, and if she’s convicted, she faces up to 99 years in prison and a $10,000 fine.