Floyd Mayweather Joined Kevin Hart On A Very Funny’Cold As Balls’, Then Left With All Of Hart’s Money 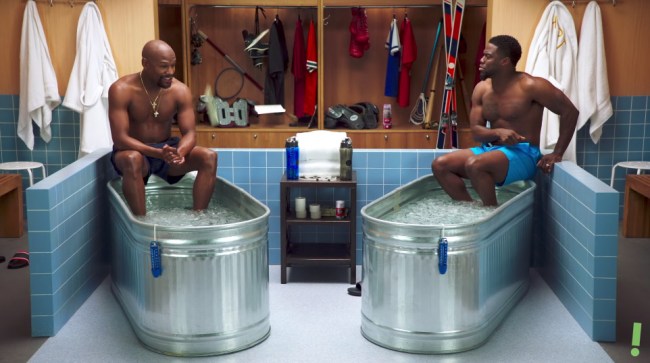 If being let in on a conversation between comedian Kevin Hart and boxing legend Floyd “Money” Mayweather sounds like something that could get out of control, then you would be correct in that assessment.

Things got crazy before Hart and Mayweather even got into their ice tubs when Kevin made the grave mistake of telling Floyd not to “square up on him like that” because Mayweather doesn’t want to “be 50 and 1.”

Of course, the conversation began on the subject of money as Floyd broke down the fact that he made $285 million for 28 minutes work in 2018.

“You know, some people do it in half a year, half a season, half a day… me? Half an hour,” Floyd explained.

Things then did get serious as Mayweather talked about growing up with seven kids in one bedroom, his dad being in prison, and how he got into boxing not for the fame or titles, but for the money so he could help out his mom, who was barely making ends meet.

They also discussed Conor McGregor or as Floyd called him, “the caucasian Floyd Mayweather, a knock-off version,” whether Mayweather will ever go into the UFC octagon, why he is such a good defensive fighter, which celebrity Kevin would like to box (take a wild guess), Mayweather’s prized possession, the best fighter he ever faced, and much more.