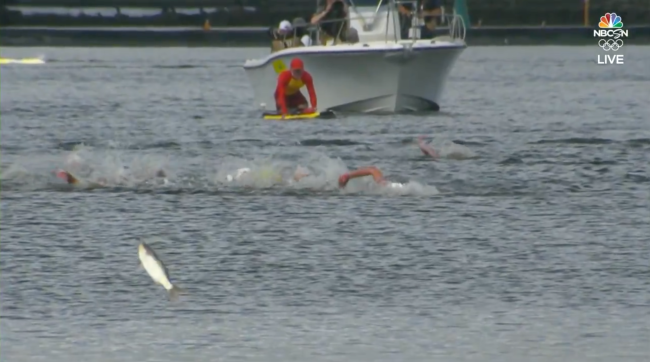 The women’s 10-kilometer open water swim was held Wednesday morning at the Tokyo Olympics and a flying fish was in contention for a medal. It had a significant lead and had the finish line in its sights.

With two laps remaining at the Odaiba Marine Park, camera crews pulled out to a wide shot of the leaders. Then, out of nowhere, a fish absolutely LAUNCHED itself from the water ahead of the pack.

LOOK AT THE FISH! pic.twitter.com/LCZYFruaoI

Odaiba Marine Park is located just off of the Tokyo Bay, which leads out to the Pacific ocean. The three most prevalent fish in the Bay are the Japanese sea perch, sea bream and flounder.

Other common fish include albacore, skipjack and yellowtail tuna, sea bass, mahi mahi and mackerel. The Olympic swimmer fish appeared to be either a sea perch or a sea bass.

Unfortunately, the fish was unable to maintain its lead. Brazil’s Ana Marcela Cunha won the gold medal with a swim of 1 hour, 59 minutes, 30.8 seconds. Sharon van Rouwendaal of the Netherlands won the silver medal nearly a second back from the winner, and Australia’s Kareena Lee won the bronze.

The top American finishers were Haley Anderson and Ashley Twichell in sixth and seventh, respectively. All of the 25 swimmers in the race were able to finish, but the flying fish could not reach the podium.

It had every opportunity to bring the gold home to its aquatic vertebrate friends and blew it. We can only hope that the moment of television fame was worth the lack of medal.