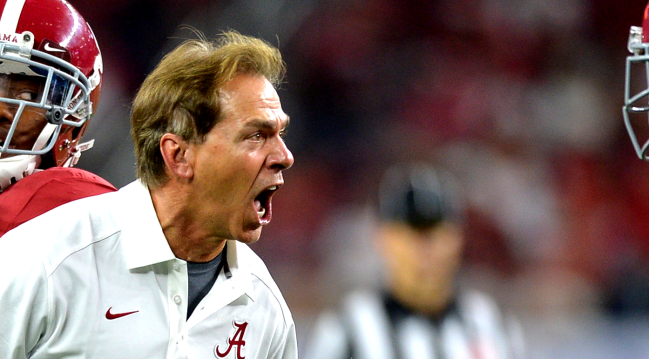 At one point in his football career, David Cornwell was the top rated high school quarterback in te nation and was deemed A.J. McCarron’s potential heir at quarterback for Alabama. Then a guy named Jalen Hurts came along.

He ended up spending two seasons at the University of Alabama as a backup before transferring to the University of Nevada where he played in one game, then finishing up his career at NCAA Division II school East Central University in Ada, Oklahoma.

Despite the fact that as Cornwell said last week, he “was as a five-star bust,” he got a lot further than most people do in their college football careers.

After all, how many people can say they were personally yelled at by Hall of Fame coach Nick Saban?

David Cornwell can, and he explained what that feels like and how he handled it on a recent episode of the Ox Cord Podcast.

“At first, it was I didn’t want to be on the scout team field and by my third year, I had kind of been injured enough to know this is where I’m going to be until I transfer,” Cornwell explained. “I just kind of took it to heat. You kind of learn what he wants, you learn how to operate and there’s a certain standard he expects. If he’s yelling at you, it’s actually a good thing because he cares about you. When he stops yelling and kind of turns his shoulder on you, that’s when it’s not as good of a situation.”

Getting yelled at by Nick Saban is a good thing?

“That’s when a lot of young guys kind of either figure out too late or figure out right on time and be really good players. Yeah, I mean, there’s too many to count screaming at me. You get blamed for anything that happens on the scout field, so I mean, it kind of got to a point whee I knew it was going to happen, respect it. He’s a great coach and it is what it is.”

Cornwell also explained that getting yelled at by Alabama strength coach Scott Cochran was far worse than Nick Saban.

“Saban, you kind of knew he couldn’t touch you,” said Cornwell. “Cochran, you were kind of like, sometimes yelling, ‘this guy might knock me out.’ Obviously, he never laid hands on you but it was kind of light, “man, this guy might fly off the handle.’ All the players had a great relationship with Coach Cochran. From what I heard from the new guys, the new strength coaches are doing a phenomenal job.

“They all love and appreciate the work they’ve been doing, but I was really close with Coach Cochran and through those workouts, he was kind of the go-between between the coaches and the players and he did a really great job maneuvering that.”