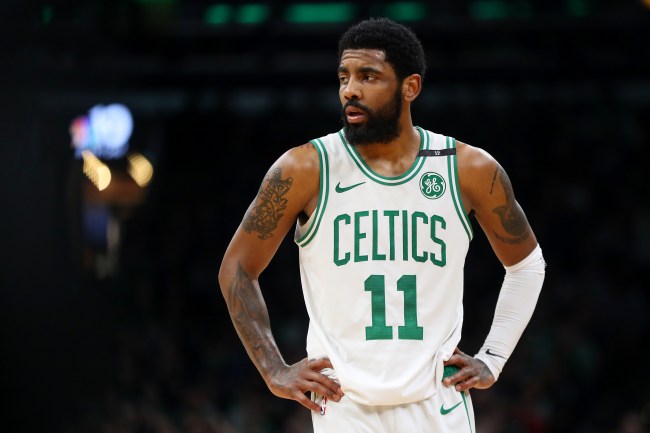 Celtics players have been pretty tight-lipped about Kyrie’s pouting and deference and awful body language all season.

But, on the very first day of the C’s summer vacation, a player who chose to remain anonymous had something to get off his chest. The player told Jeff Goodman of Stadium that Kyrie is “hard to play with” despite having divine talent.

“Everyone respects his talent, but he’s hard to play with,” the player said. “It’s all about him.”

Kyrie’s moodiness has been well-documented throughout his eight year career. Just watch one of his press conferences after a loss–he makes Bill Belichick look like Sean McVay.

“He takes the air out of the locker room,” the player added. “And you just never know what you’re going to get with him.”

“Doesn’t want to listen to anybody,” the source said. “I’ve been around more selfish guys, but when you add up those three — moody, immature and tough to coach — he doesn’t have a leg to stand on.”

Former Celtic bruiser Kendrick Perkins had no issue revealing that Kyrie was disrespectful to the city of Boston and just an overall poor leader.

"In this series I think the way Kyrie went about it was disrespectful to the city of Boston, disrespectful to the organization and he didn't represent what Celtic Pride is all about… He was a bad leader and it was proven he's not a Batman." — @KendrickPerkins pic.twitter.com/OcUQG8rJ6V

Kyrie Irving should be humbled right now. It will be interesting to see if he embraces it and evolves or just continues his ‘me against the world’ bullshit.