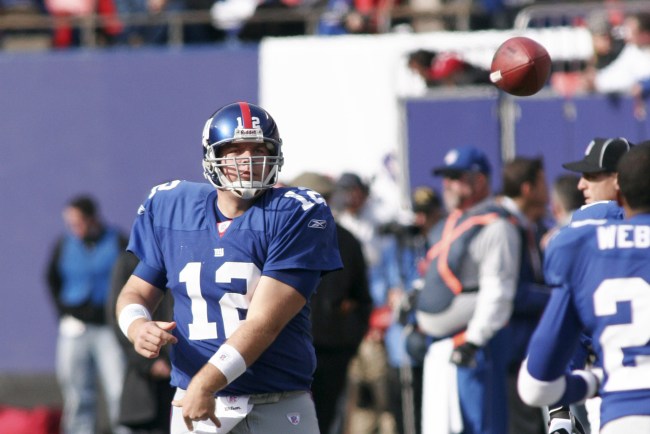 Former Giants backup QB Jared Lorenzen inspired thousands when he announced last year that he’d be taking control of his life after ballooning to a scary 502.8 pounds, thanks to a diet that consisted primarily of microwavable salisbury steaks, lasagnas, Kentucky Fried Chicken, fish sticks, and mac and cheese.

The 38-year-old affectionately known as the “Hefty Lefty” teamed up with renowned celebrity nutritionist Dr. Philip Goglia and celebrity trainer Gunnar Peterson to start The Jared Lorenzen Project, and worked hard to shed over 100 pounds.

In recent weeks, the former University of Kentucky star reportedly had fallen ill and was hospitalized for what we now know are serious health issues.

Lorenzen’s family asked Kentucky Sports Radio’s Matt Jones to share the following update on his health, and it is not good.

“On Friday, June 28, Jared began playing a bigger, more important game than he’s ever played before. Jared had not been feeling well for a few weeks and that finally caught up with him. He was brought to the hospital and fairly quickly was admitted to the ICU. Jared is battling an infection, kidney and heart issues. He is fighting with everything he has and his immediate family is by his side. We will attempt to update as often as possible, but please respect that some aspects of this journey are private matters.”

Prayers for my good friend pic.twitter.com/lOmFGiPeAm

Lorenzen threw for a Kentucky school record of 10,354 yards before spending two years as Eli Manning’s backup and winning a Super Bowl in 2008.

The family said they will provide more updates on Lorenzen’s condition when available.