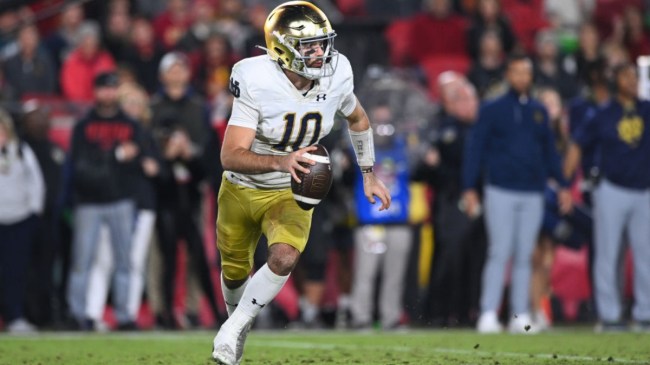 Despite a successful stint under center this year, it was still expected that he would have to win a quarterback competition to keep the starting job next season.

Instead of trying to beat out the quarterback that won the job to start this season, Pyne decided to enter the transfer portal.

Today, Pyne revealed where he would be playing next season. Pyne will be heading to Tempe to play for the Arizona State Sun Devils.

Pyne wasn’t expected to be the starting quarterback for Notre Dame this season, but made the most of his opportunity when Tyler Buchner was injured against Marshall.

Pyne started the next 10 games and threw for 2021 yards and 26 touchdowns and also added a pair of scores on the ground.

Pyne helped turn around a rough start for the Fighting Irish this season. After losing their first 2 games of the year to Ohio State and Marshall, Notre Dame won 9 in a row with Pyne as the starter, including an upset win over Clemson. Pyne’s only loss as the starter came in the regular season finale at USC.

Arizona State could certainly use the kind of consistency at quarterback that Notre Dame got out of Pyne this season. The Sun Devils started last season with Emory Jones at quarterback after he transferred from Florida and he had a disappointing year for his new team. Jones threw for just 7 touchdowns in 8 games before being replaced by Trenton Bourguet.

Boutguret was an upgrade for the Sun Devils, but they still struggled to win games with him under center. Now Arizona State will get a quarterback who has earned wins against multiple teams that found themselves in the top 25 this season.

It looks like things are already going pretty well for Arizona State as they move on from the Herm Edwards era.