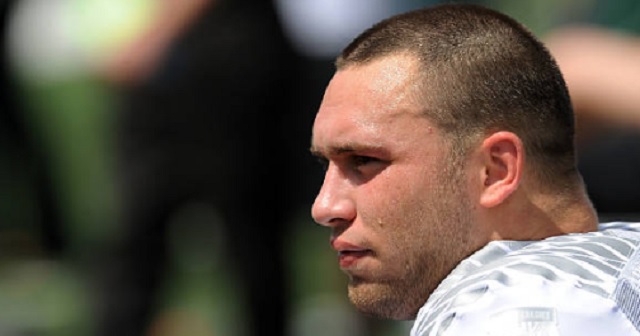 Former Oregon tight end Colt Lyerla is currently wanted by police after he escaped from a prison in Washington County Thursday night.

Ex-Oregon Ducks star Colt Lyerla has escaped from a correctional facility … and now cops in Oregon have issued a warrant for his arrest.
Lyerla was slapped with a six month sentence in March after being convicted on a drug possession charge.

A rep from the Washington County Community Corrections Center tells TMZ Sports they realized Colt had bolted from their facility Thursday afternoon, after an open window triggered an alarm.
They did a search of the building and noticed he was missing.

The rep says they’ve placed 24-year-old Lyerla on “escape status” and a warrant has been issued for his arrest.

Lyeria has had several run-ins with the law since his departure from Oregon, Back in 2013 he was convicted for cocaine possession and was then arrested in the following year for suspicion of driving under the influence.

This year, the former Ducks tight end has twice been arrested on drug and forgery charges.