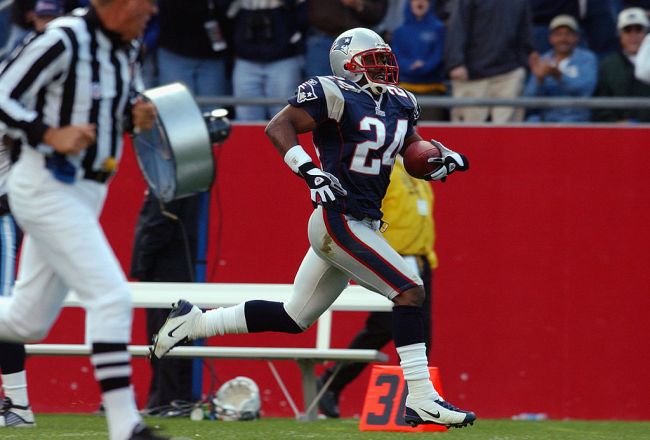 Earlier this week during the mega cast of the Packers-Lions game, Manning took a shot at the Patriots over the Spygate scandal.

Peyton “I think our conversation was bugged like the Patriots used to do back in the day” pic.twitter.com/cBqrZ0uGHh

Manning went on to joke that he would talk to his receivers in the shower because he feared the Patriots had bugged the locker room.

Peyton saying they did meetings in the showers because his locker was bugged after the Giants – Pats SB in Indy 😂 pic.twitter.com/k52v71VACG

“Every time I used to play against New England I would go and talk to my receivers like in the shower, in the far corner. I was like don’t talk about a play next to my locker because I know it’s bugged.”

On Tuesday, Law, who played for the Patriots from 1998-2004, appeared on the Greg Hill show and fired back at Peyton for his comments.

“Let’s be honest, we were in his head a little bit. That’s OK. That’s Bill Belichick scheming up things and giving players confidence, so you probably did think we had a bug in there because we knew what you were doing,” “I ain’t gonna tell no secrets right now, but we knew what he was doing. So go ahead in the shower with all your buddies.”

“Because if you want to go to those extremes, when they were talking about how we played aggressive on their wide receivers,” Law said. “What did they call it, the ‘Ty Law rule’? I mean, I look at that as a compliment. We just came out there, we kicked ass, we took names, and y’all had to go home mad on the bus and we went to the Super Bowl. I take satisfaction in it. It’s not frustrating at all. It’s funny.”

“Peyton is my friend, a great quarterback, a great competitor,” “But there’s gonna always be a lot of talk about that rivalry, whether it’s him joking about we had it bugged or this-gate or that-gate… But Peyton is great. I think his analysis is funny, his wit is awesome. I enjoy listening to him.”