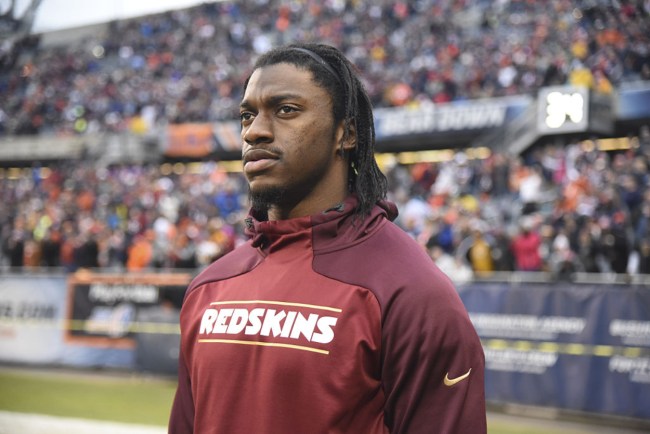 Robert Griffin III recently announced that he’s written a book titled ‘Surviving Washington.’ The former NFL quarterbacks says the book will walk readers through the most dysfunctional franchises in all of sports, that franchise of course being the Washington Football team.

RG3, who was drafted second overall by Washington in 2012, explained the book will “open your eyes to the sexual harassment that permeated the walls of that building.”

Shortly after he announced the book, Griffin III explained that the sexual harassment he is alleging involves his own experience.

While many Washington fans have called out Griffin III for writing a tell-all book while recently tweeting that he wanted to return to the franchise given their injury woes at QB.

Now, it’s not just fans calling RG3 out, former Redskins players have started criticizing the QB over his new book.

Former Redskin and three-time Pro Bowler LaVar Arrington called it “kind of a b-tch move” on a recent episode of the ‘2 Pros and a Cup of Joe‘ podcast. Arrington did call team owner Daniel Snyder an “evil dude,” but also went off on RG3.

“Why didn’t you do your tell-all three or four years ago?” Arrington asked. “Because you were scared of backlash that you would receive saying what you believed your truth was in a time where you didn’t have all of the stuff that has come out with the cheerleaders, and the emails, and all this stuff that makes it safe for you to be a front-runner of justice.”

“I hate when dudes do b-tch moves to be heroes and you do it in the comfort of knowing people already know what’s going on. Stand up and be a man, do that ‘S’ before now.”

While Arrington’s words were harsh, former Redskin Fred Smoot thinks Griffin III is just chasing attention after he “failed at his career in the NFL.”

“I just don’t know what RG3 was thinking, at what point does this benefit him? At the end of the day, nobody is waiting for RG3’s thoughts about Washington,” Smoot explained. “Then he named it ‘Surviving Washington’, was R. Kelly there? Did I miss something? Bobby (RG3) is an irritant, and that’s what Bobby loves to do.

“Bobby failed at his career in the NFL, let’s be honest, now he wants to bring attention to himself by any means necessary, and that’s why he wrote this book, and I can’t believe somebody is actually going to read it.”

There’s no denying that the franchise is indeed a mess and has plenty of explaining to do. Smoot and Arrington simply don’t want Griffin III to be the guy doing the explaining.