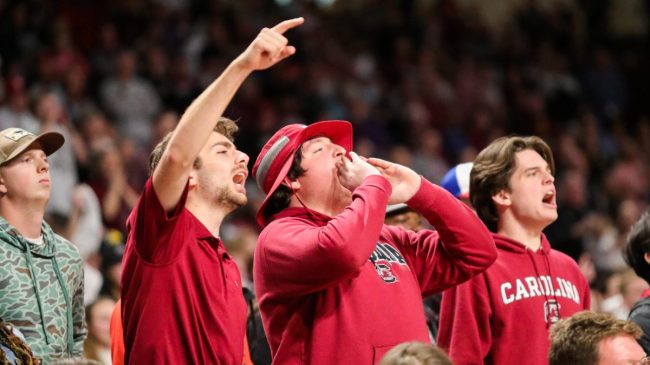 GG Jackson is one of, if not the top recruit in the 2023 college basketball recruiting rankings.

On Wednesday, the budding star made his college decision. A Columbia, SC product, the prospect spurned the hometown Gamecocks, instead choosing to attend the University of North Carolina.

Most believe that to be the easy choice as the Tar Heels are fresh off a run to the national title game, but the decision wasn’t always so clear. With Frank Martin at the helm at South Carolina, the Gamecocks appeared to be neck-and-neck with the college basketball blue blood.

The Gamecocks fired coach Martin after the conclusion of the 2021-22 season, though, causing Jackson to rethink his stance on the program.

Jackson’s decision ultimately came down to UNC, Duke, South Carolina, and Auburn with the Tar Heels winning out. After the decision went public, a former South Carolina staffer took a moment to jab at the school that fired him.

John Reynolds, an assistant coach under Frank Martin, took to Twitter to throw some shade at his former employer. He wrote a post saying, “Man what could’ve been…,” in response to GG Jackson’s decision to attend North Carolina instead of South Carolina.

Reynolds was on staff for five years at South Carolina, and from his comments, it seems that the Gamecocks had a legitimate chance to snag Jackson’s commitment had they held on to coach Martin.

Unfortunately, the two sides parted ways as Martin and Co. were never able to capitalize on South Carolina’s 2017 Final Four run. Following the improbable feat, the Gamecocks failed to win 20 games in any season or make the NCAA Tournament.

There were certainly reasons for keeping Martin on.

While he managed more than 18 wins in just two of his 10 seasons, the Gamecocks almost always performed well in the SEC. They finished .500 or better in four of his last six years.

But head-scratching losses in non-conference play (i.e. a 24-point loss to Coastal Carolina this past year) doomed the Gamecocks year after year. When the season was through, the school decided it was time to part ways.

Lamont Paris becomes the new head coach after leading UT Chattanooga to the NCAA Tournament last season. He wasn’t able to reel in GG Jackson but he’s hoping to bring the Gamecocks back to the postseason in the very near future.