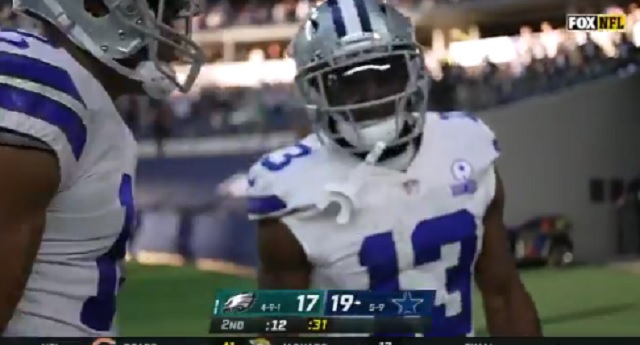 Last week, Fox Sports debuted a new end zone camera that wowed fans because of how great the quality looked.

According to a report from Yahoo Sports, the Fox Sports team isn’t using an 8k camera like many mistakenly reported but are filming with a high-end Sony consumer camera that gives fans a different depth of field compared to the normal TV cameras used for broadcast.

Alright, here's the clearest look at that #FOXcamera set up I've seen so far. Ronin gimbal, Sony Camera, Sony lens. Camera is controlled by the buttons and joystick on the handle. Photo: (AP Photo/Andrew Harnik) pic.twitter.com/OmDNKxkCRk

“It’s a bit of a Frankenstein,” Fox Sports SVP Mike Davies said Sunday, explaining that the kit consists of a high-end Sony consumer camera, a gimbal (which keeps the camera steady while on the move), and a backpack transmitter that sends the video back to the production truck. The results were anything but monstrous. Jacob Feldman
Mon, December 21, 2020, 10:31 AM EST·2 min read

The images appeared novel to viewers (many of whom incorrectly identified them as 4k or 8k) largely because of the camera’s different depth of field effect, which often led to blurry backgrounds and up-close subjects seemingly popping off the screen. But there’s nothing groundbreaking about the components, many of which are used by social video creators.

Fox brought back the camera for this week’s Cowboys-Eagles game and the results were amazing.

This really might be the clearest anything has ever been 🤯 pic.twitter.com/0P4kq5yHCK