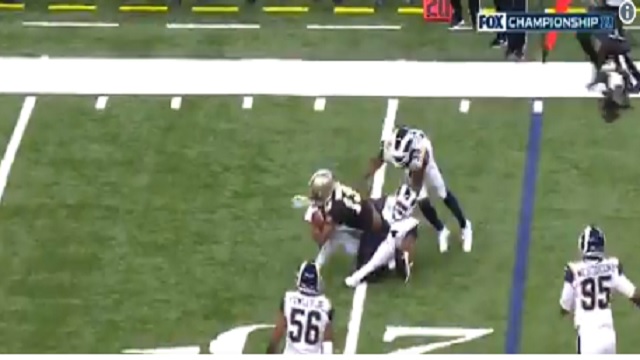 Millions of people are currently watching the NFC championship game between the Saints and the Rams and Fox is making sure that no butts are being shown to children.

In the first quarter of today’s game, Fox quickly cut away from the action on the field when it looked like Michael Thomas’ butt was going to be exposed while he was getting tackled to the ground.

thank you FOX for cutting away from michael thomas' butt i don't know what i would've told my children pic.twitter.com/Dyzwg8IC14

Funny how Fox just tried to censor Michael Thomas’ ass out after that catch. Anyone catch that? #LARvsNO #LARams #GoSaints

Fox did not want you seeing michael thomas ass lol. They immediately changed the camera to show outside the dome #saints #rams #NFCChampionshipGame pic.twitter.com/mxU6dbN90z

Did FOX drop out of the end of that last play so that the audience wouldn't have to see the top of Michael Thomas' butt? #NFCChampionship

they just cut away from the field to show a half second shot of the outside of the Superdome because Michael Thomas's pants came down and you could almost see his butthole. so there is a butthole button somewhere in the fox production studio. someone report this out please

All Saints offense in the first quarter. Rams with 15 total yards. But all everyone can talk about is FOX refusing to show Michael Thomas' buttocks. #LARvsNO