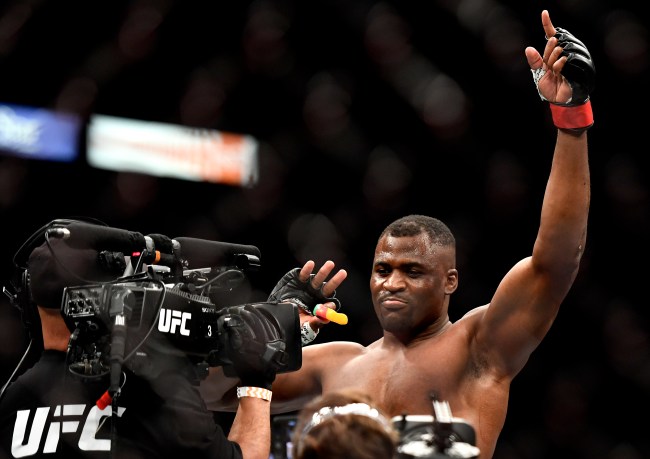 Becoming the UFC’s Heavyweight Champion is a near impossible feat for any man, but for Francis Ngannou, it’s a damn miracle.

The Predator grew up in the poverty-stricken town of Batie, Cameroon and at just 10 years old, he was digging at a local sand quarry just to provide for his single mother and his aunt. Dumpster diving was a necessity at times, and Francis would head down to the market at night just to rummage through the trash for something salvageable.

“Sometimes you’d argue with a rat in the trash – ‘Get away from this tomato, it’s mine, this rotten tomato is mine, not yours,'” he told The Joe Rogan Experience.

Now, after a knockout against Stipe Miocic in the second round, the 34-year-old is can now call himself UFC’s Heavyweight Champion of the world. Residents in his birth town stayed up until 5:15 am to witness history on March 27.

Fans stayed up until 5:15am to watch hometown hero Francis Ngannou win the UFC Heavyweight Championship and look at what it meant to them.

Ngannou returned to his native land of Cameroon for the first time as Champion, and it appears that all 25 million Cameroonians lined the streets to offer him a hero’s welcome like nothing I’ve ever seen.

The scene in Douala, the largest city in Cameroon and the country’s economic capital.

Francis getting a massive hero’s welcome back home in Cameroon. Lovely to see. Can’t imagine what this must feel like for him. pic.twitter.com/BdseemL6Y7

This moment is something I have been waiting for. It is hard to put this feeling in to words. The belt is back home where it belongs 🏆🇨🇲 #CROWNEDCHAMP pic.twitter.com/brUwjokoIE

If this doesn’t inspire you, I’m fresh out of ideas.