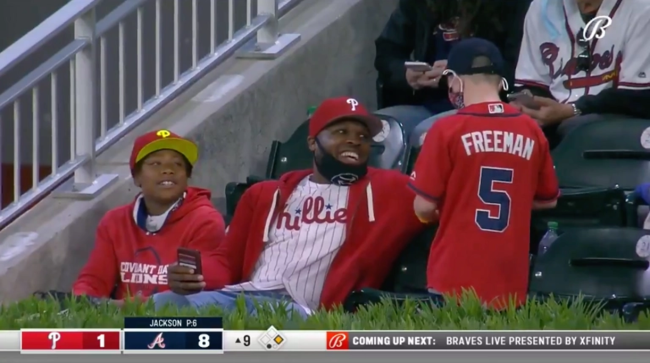 Friday night, during the Phillies and Braves game, Atlanta first baseman Freddie Freeman jacked a two-run homer into the right field stands. Waiting for the bomb, glove at the ready, was a young man who, much to his dad’s comical chagrin… dropped the ball. Twice.

After being suitably trolled by his dad for misplaying the ball, not once, but twice, the young Phillies fan tracked down another yougster wearing a Freddie Freeman Braves jersey and tossed him the ball, obviously making his day as he ran over to show his dad.

It was a great scene and one more reason why baseball is so fun.

The young Phillies fan, whose name is Joshua, was also in attendance at Truist Park on Sunday during the series finale between the Braves and Phils.

When Freeman got wind of that news, he decided to reward Joshua for his wonderful generosity by presenting him with an autographed baseball signed by not only himself, but also by Bryce Harper, whose jersey Joshua was wearing that day.

“I’ll try to hit you another one,” joked the reigning National League MVP.

Friday: @iamjamesscott1 and his son Joshua gave their @FreddieFreeman5 home run ball to a Braves fan.

Tonight: Freddie surprised Joshua with a baseball autographed by both Freddie and @bryceharper3! pic.twitter.com/N9ciuOzHbq

How great is that?

Another great father-son moment took place during the series as a dad from Guatemala flew to Atlanta with his 5-year-old son so they could watch their favorite player Ronald Acuña, Jr. on Friday.

When Acuña heard about it, he invited the man and his son down to actually meet him.

This is the part of the game that I love the most! Thank you and the little one for the video and I hope I can bring more moments like this! 🙏🏾 https://t.co/SZHpO0mUAc

On Friday, this 5-year-old @ronaldacunajr24 fan from Guatemala saw his idol hit a home run.

What a great moment and one that this father and son will not soon forget.