Ex-Eagles WR Freddie Mitchell, Who Cheated The United States Government, Calls Out The Patriots For Cheating 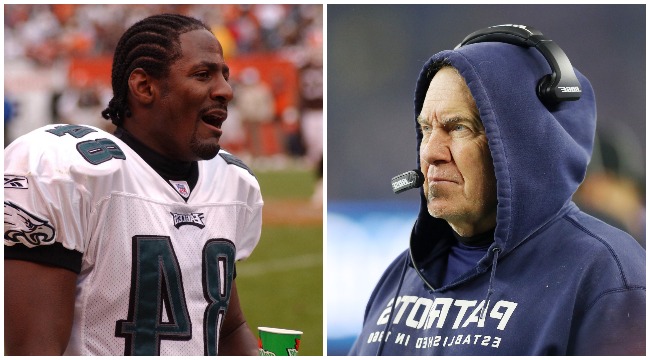 The former Philadelphia Eagles receiver was served three years in prison in 2013 for federal tax fraud just a few years after he was arrested on charges of being a fugitive from justice due to an outstanding warrant for failure to pay child support.

Mitchell, who was far from an impact player, famously ran his mouth in the lead up to Super Bowl XXXIX against the Patriots, saying he only knew the numbers and not the names of the New England defensive backs.

After the Patriots beat the Eagles to win their third Lombardi Trophy in four years, Bill Belichick expressed his hatred for Mitchell.

“All he does is talk,” Belichick told Sports Illustrated. “He’s terrible. And you can print that. I was glad when he was in the game.”

It appears that prison hasn’t humbled Freddie Mitchell, as the 41-year-old likened the blatant systematic cheating of the Houston Astros to the New England Patriots in an attempt to explain why he caught only one pass for 11 yards in the Super Bowl.

Note: Tom Brady has two more Super Bowl rings than the number of seasons Freddie Mitchell was in the league. This is not a fair fight.

Mitchell is the same guy who blasted the Eagles public relations director because he wasn’t given his own podium at Super Bowl media day, but instead tucked away in the bleachers.

He also told Patriots two-time All-Pro safety Rodney Harrison: “I got something for you, Harrison.”

Harrison had two interceptions and a sack in the game and is one of only four players in Super Bowl history with a sack and interception in the same game.

Mitchell blamed his own lack of production in the Super Bowl on the return of Terrell Owens, who returned with a broken ankle.

“I couldn’t shut a lot of people up that I wanted to shut up,” Mitchell said.

Mitchell would never again play another game in the National Football League.