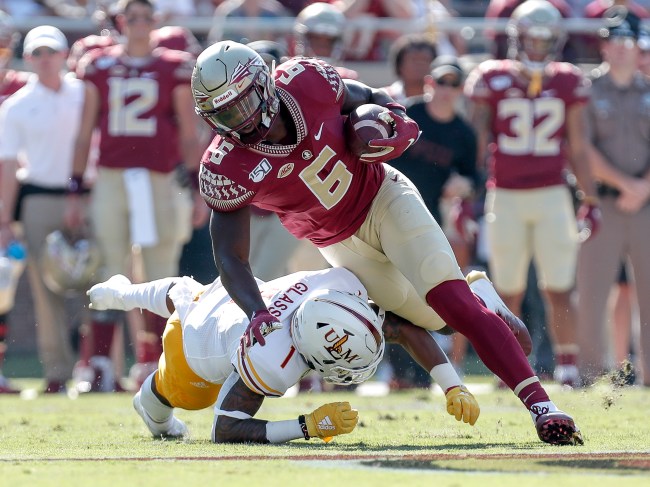 The current Florida State Football program is the worst it has been in my lifetime. This hits particularly hard for me because I’m an FSU graduate who lived through the waning years of Bobby Bowden’s greatness and had to suffer through the likes of quarterbacks like Chris Rix and a ‘Noles team that somehow managed to lose to Miami five times in four years because we also played them in a bowl game.

FSU had the nation’s longest Bowl Game streak until last season when everything that could’ve possibly gone wrong did go wrong and the Seminoles had their first losing season in decades. They started off this season by blowing an 18-point lead AT HOME to Boise State and then in Week 2 they were pushed to overtime where they BARELY beat Louisiana-Monroe 44-45, a Sun Belt conference team whose only been to one bowl game in the program’s history.

Back in 2013 when the Seminoles won the National Championship in their undefeated season, the Seminoles offensive line went viral for a play where the whistle was blown and a single player on the line didn’t move because they knew there was a flag on the play. The linemen just stayed rooted in place. People on Twitter loved it.

Flash forward to last weekend and the ‘Noles went viral again but this time it wasn’t an impressive display of discipline, it was Tight End Tre McKitty lining up facing backward and getting roasted by everyone on the Internet.

Tre McKitty spoke with The Athletic to explain what was happening and his coach, new Offensive Coordinator Kendal Briles, backed up his explanation:

“I’ve got a million messages about that. The offensive line had messed up, then we had to hurry up and get set so the defense couldn’t see our formation before the play. So there’s nothing wrong with me. I didn’t line up the wrong way on accident.”

Here’s what OC Kendal Briles had to say in response to McKitty’s explanation:

Briles: “It was a stopping situation where you cannot tempo, so we came off the sideline and it’s a thing that we do offensively. The guys can line up wherever they want. I don’t care. Just get to your spot where you need to get to. We pushed the tempo and I think we gained 11.”

Briles: "It was a stopping situation where you cannot tempo, so we came off the sideline and it's a thing that we do offensively. The guys can line up wherever they want. I don't care. Just get to your spot where you need to get to. We pushed the tempo and I think we gained 11."

Do we buy this explanation? I mean, yeah, sure, it’s plausible and it makes sense. But there’s really no indication that he purposefully lined up facing backward to throw off the defense reading the formation and distract them.

The evidence is that he wanted to get into place so they could run a play, which they did, and as Briles points out they gained yards so it was fine.

But is it really that hard to face the right direction? This dude has probably been playing football for more than half of his life, how does he not know which direction he should be facing AT HOME in Doak Campbell Stadium?!

There’s no reason he should’ve been turned around unless this was a gimmick to distract the defense. If that was the case, unfortunately, we have no idea if it worked or not because FSU did gain yards but we don’t know if it was the result of that distraction.

And this is all a distraction from the fact that FSU was pushed to OT at home against Louisiana-Monroe and nearly lost!

It’s a pretty miserable time to be an FSU fan but we can’t appreciate the highs without the lows. Hopefully, things turn around in the near future as this team comes together over the span of this season.